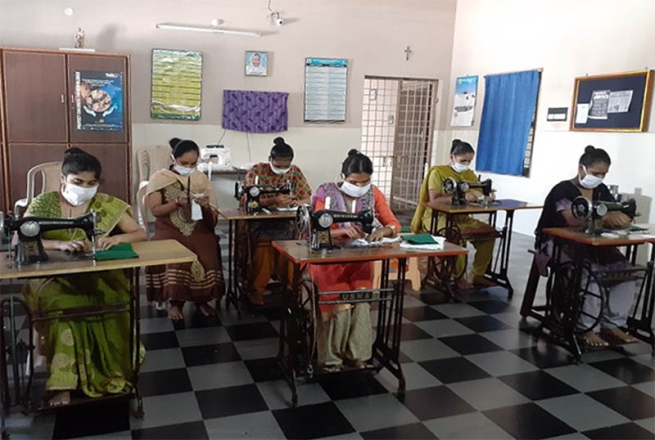 (ANS – Ravulapalem) – Fifty young women who live at the Salesian Surakshita Home, located in the town of Ravulapalem in Andhra Pradesh, India, were supported through donor funding from Salesian Missions, the U.S. development arm of the Salesians of Don Bosco. Surakshita Home provides living facilities for young women who have been in legal trouble. There are dorms, bathrooms, a dining hall, a work room and a training hall.

The funding, which provided support from March to October 2022, was used for empowering women with information about their rights, along with skills training in tailoring, Maggam and other handicrafts. Funds were also used for the purchase of training materials.

When young women enter the program, they are given clothing and proper nutrition. They are sent for a medical examination, and women with special health needs receive individual follow-up care. They are also able to access a counselor and legal support for their cases in court.

During eight months, 50 women completed the tailoring course and some found jobs at tailoring shops. Others were able to do dress making and embroidery work for themselves and for others. Twenty of the women were given tailoring machines to earn an income and sustain themselves.

“This program is giving young women in trouble with the law a second chance at life as well as the skills to gain employment and sustain themselves,” said Father Gus Baek, director of Salesian Missions. “Salesian programs not only educate, but they prepare young people for work in fields that are hiring and jobs are available. These young women have learned skills that will enable them to become self-sufficient.”

India has the world’s fourth largest economy but more than 22 percent of the country lives in poverty. About 31 percent of the world’s multidimensionally poor children live in India, according to a report by the Oxford Poverty and Human Development Initiative. A multidimensionally poor child is one who lacks at least one-third of 10 indicators, grouped into three dimensions of poverty: health, education and standard of living.

Salesian programs across India are primarily focused on education. Salesian primary and secondary education in the country helps youth prepare for later technical, vocational or university study. Other programs help to support poor youth and their families by meeting the basic needs of shelter, proper nutrition and medical care.