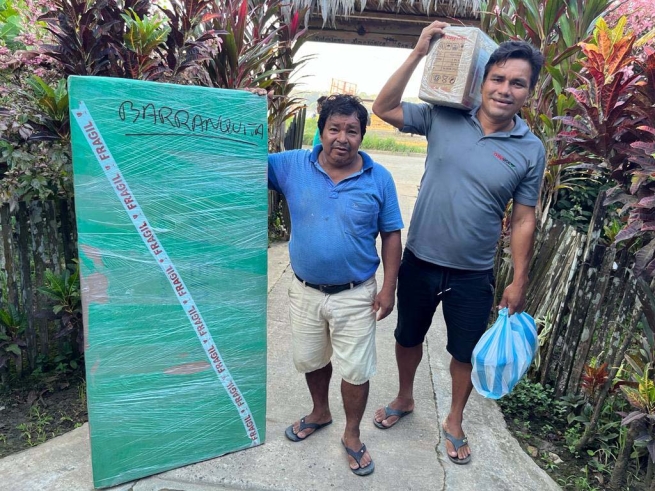 (ANS – Lima) – Top of FormSalesian chapels in Peru received solar panels to help with electricity thanks to donor funding from Salesian Missions, the U.S. development arm of the Salesians of Don Bosco. Solar panels were provided to Santa María de Cahuapanas, Barranquita, Chopiloma and one other chapel.

Given the size of the Santa María chapel, two solar panels were installed. Prior to the installation, the chapel did not have electricity. One Salesian said, “This is a the very large chapel and many people participate in the Mass there. They have not had any electricity for a long time and during my visits I have suffered a lot to be able to celebrate Mass at night. One battery would not be enough to illuminate the whole chapel.”

The chapel is also undergoing other renovations including upgrading the roof and adding solar lighting. The work is being done in coordination with the local Catholic community. People have been grateful for the donation and the consistent electricity.

“We are grateful for donor support to provide this new source of electricity for Salesian chapels in Peru,” said Father Timothy Ploch, interim director of Salesian Missions. “This provides an opportunity for people to attend church services more comfortably but is also helpful for the priests saying Mass.”

Peru faces high levels of income inequality and has more than a quarter of its population living in poverty, according to the World Bank. Poverty levels are significantly higher in rural areas but urban areas struggle most with inequality, most notably metropolitan Lima. Poverty in the country is made worse by a shortage of productive farmland and a lack of job skills among women entering the workforce, as well as a lack of adequate housing, nutrition and education.