Spain - Celebration of Anniversaries of Salesian Presences in Barakaldo: a time to give thanks and dream about the future 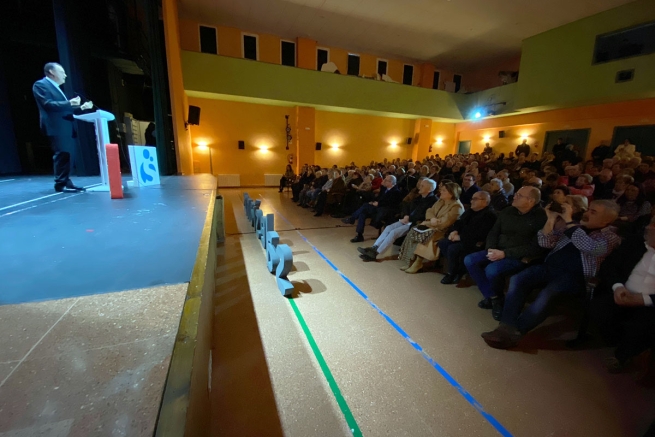 (ANS - Barakaldo) - The official act of closing the anniversaries of the Salesian presences in Barakaldo - "Salesianos Barakaldo" (125 years), "Salesianos Cruces" (80), and "Salesianas Barakaldo" (75) - became a moment to give thanks for the path traveled and to dream of a future together among educational entities, schools, and institutions. The "Salesianos Cruces" school joyfully hosted the ceremony, which was prepared down to the smallest detail, with careful and timely moments for speeches and fine musical performances.

Present in the center's Main Hall were members of the Salesian Communities of the three works, the Salesian Family of Barakaldo and the Spain St. James the Greater (SSM) Province, some Salesians linked to the works of Barakaldo, and the full SSM Provincial Council, which accompanied the central guest of the event, namely the Rector Major, Fr. Ángel Fernández Artime.

Also present, the mayor of the city, Amaia del Campo; the President of the Association of Christian Schools of the Autonomous Community of the Basque, "Kristau Eskola," Eugenia Iparraguirre; and the Territorial Delegate for Education of the Province of Biscay in the Basque Government, Iñaki Orbe.

After a few formal photos, the closing ceremony began with a special traditional Basque greeting, the "aurresku" dance, sung and danced by two young people. Then, the event’s two presenters, Mikel Albira and Leire Arrarte, both lecturers of "Salesianos Barakaldo", introduced the series of official speeches.

Fr. Fernando García, SSM Provincial, paid tribute to the efforts and commitment of those who made Salesian history in Barakaldo. He spoke of the people who for 125, 80, and 75 years dedicated their lives there and imprinted deep roots to the Salesian charism in that town. "It is the memory of the past that must continue to enlighten us in the present," he said.

Next, Sister Isabel Pérez, Daughter of Mary Help of Christians (FMA) and Delegate for the Salesian Family, spoke on behalf of Sister Rosario Ten, FMA Provincial of Spain. She briefly recalled the history of the Salesian Sisters in Barakaldo and closed her speech by emphasizing the common mission that the city's works reflect, "And celebrating these anniversaries together makes this very evident."

Speaking in Basque and Spanish, Kristau Eskola's President recalled the life of football player Ramón Zabalo - who had much to do with the start-up of these three Salesian schools in Barakaldo. "We must thank God and the Salesian Family for the experience, history, and educational wisdom of those who have gone before us. And celebrate as a people the Salesian educational work on the left bank of the Bilbao estuary."

Amaia del Campo, mayor of Barakaldo, thanked the Salesian work for the values that so many of its citizens have learned and experienced through the education received in these three centers and offered to accompany its future development.

In the same vein, Iñaki Orbe, said Salesian works have been and are a reference point for thousands of people who have passed through their classrooms. He then thanked the teachers, "Education has changed profoundly and we owe it to the teachers and professors and leadership teams."

The speeches were closed by the Rector Major, who began his remarks by thanking the authorities, "Your presence here with us means a lot."

"We have to thank this land and this city because they welcomed us and we were able to put down deep roots there. As a family, we have felt loved. On behalf of the Salesian Congregation and the Salesian Family we continue to bet on a future in this land because it is absolutely worth it," he added.

The institutional act closed with a moment of agape in the center's library - a time to meet informally, reminisce, dialogue... Following this, now in the evening, at 8 p.m. local time, the Rector Major presided over a Eucharist open to all members of the Salesian Family as a definitive thanksgiving to God for Salesian life in Barakaldo. It was at this moment that the Rector Major expressly uttered the phrase by which he declared, "the acts of celebration of 125, 80, and 75 years of Salesian presence in Barakaldo are concluded."

However, he still had time in his homily to state, "Celebrating an anniversary is an opportune occasion to tell us how beautiful what we are doing is. To be an almost invisible but transforming yeast. This happens every day in our lives. We never know the good that is being done and where the smallest thing we do ends up."

A final blessing concluded the day.

On the morning of Sunday, January 22, the Salesian and FMA communities of Barakaldo gathered with the Rector Major around the Eucharistic Table at "Salesianos Barakaldo." After an agape time with all present, the Rector Major then returned to Turin to resume the work of the plenary session of the General Council.