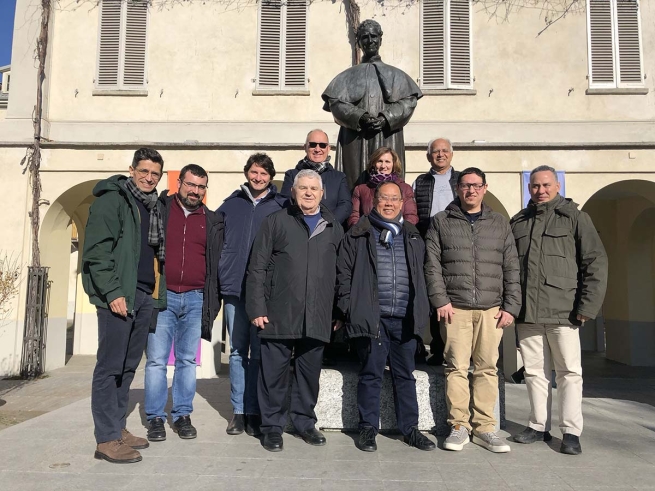 (ANS – Turin) – The Rector Major has four “Mission Offices” (aka “Procuras”) totally at his disposition to help him carry forward the mission of the Congregation worldwide. COVID-19 blocked the annual meetings of these Offices but did not stop their work. Instead, they had to work all the harder and with much more creativity to confront the challenges posed by the pandemic: many of the traditional donors lost their jobs and/or saw their income drastically reduced; they could not pay personal visits to some of their major donors, whether institutional or individual; the staff could not come to the office any longer; meetings and interactions had to be all online, etc.

Three of the four Offices had a change in leadership, too, during this period. After a gap of over three years, they did have a lot to share, study, discuss, and plan the way forward.

Representatives of these four Offices (located at New Rochelle, Madrid, Turin, and Bonn) met at Valdocco, Turin, from 18 to 21 January 2023. The Councilors for the Missions, Fr. Alfred Maravilla, convoked the meeting and Fr. George Menamparampil organized it.

“We looked at our Emergency Response Protocol, principally to its application to the unique and unprecedented disasters, the pandemic, and the war in Ukraine. Nothing like these had been foreseen at the time of its drafting by the DBN (Don Bosco Network) and its approval and adoption by the Rector Major and his Council in 2016. Nevertheless, despite a few initial hitches, we handled these emergencies well enough. We looked at possible improvements to the protocol,” Fr. Menamparampil shared.

It was a pleasant realization that all the Mission Offices have done well in financial terms in the past three years, despite the difficulties faced by them and their traditional donors.

“We worked at length on ways to improve the flow of information among us and develop synergies that could raise the level of transparency, efficiency, effectiveness, and professionalism, not only to our work, but also to that of the Provinces and Congregation,” Fr. Menamparampil went on.

A thorough study was made of the Solidarity Fund of the Rector Major to which all the above-mentioned offices as well as the foundation “Don Bosco Nel Mondo” regularly contribute funds.

“We also looked at the close collaboration between DBN (Don Bosco Network) and how we could enhance it further,” the Salesian concluded.

Clear decisions were made about steps to be taken in the immediate future.

The meeting was hosted by “Missioni Don Bosco”, Turin.