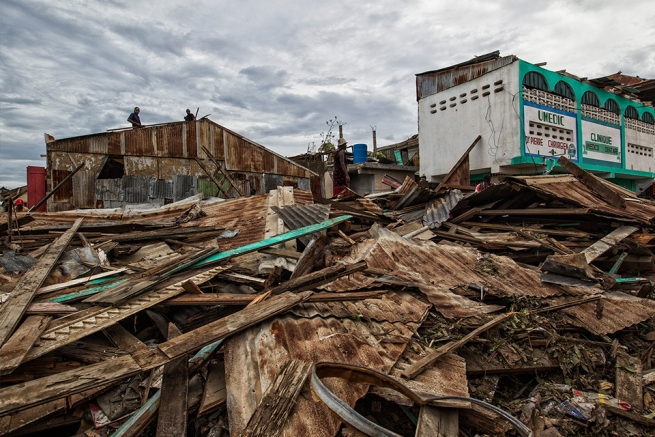 (ANS - Les Cayes) - Haiti is suffering yet another humanitarian crisis. Hurricane Matthew hit the country and has caused a new emergency, worse than ever. More than 2 million people are affected, about 1.5 million people need emergency assistance and more than 60,000 are homeless. The number of deaths is not clear: at least 375 have died, but some organizations are speaking of more than 900 deaths. "This is the richest area of ​​the country and now it is devastated. There is nothing, no cultivation, no food. It is a real humanitarian catastrophe," according to Fr Victor Auguste, Salesian, Deputy Director of the Rinaldi Foundation of Haiti.

Several countries have sent aid and emergency personnel. Salesians around the world, in collaboration between the various Mission Offices and along with the Rinaldi Foundation, are implementing an action plan in four stages:

3. Provide seeds and agricultural tools to the people;

4. Help some families to rebuild or renovate their homes.

To deal with this new emergency, the Salesians in Haiti have launched an appeal to the whole Salesian Family throughout the world to send donations.

With the coordination of the Rinaldi Foundation, the Salesian parish in Les Cayes has begun distributing food to last 3,000 people for several days. Moreover, because their water purification system is still working, they are able to supply drinking water to those who need it.

The goal of the Salesians in the coming days is to send two trucks with essential supplies from the capital Port-au-Prince to Les Cayes.

With 80% of crops destroyed and thousands of small homes in ruins in the south of the country, the Salesians have stated their decision to "stay where there are thousands of young people who need us", and they rely on the solidarity of the Salesian Family throughout the world.

The concern is now around the incidence of cholera which has affected the country this year and is likely to spread due to the lack of drinking water and medicine.