Sierra Leone - "Your name is John Bosco? With that name you should not be in prison." 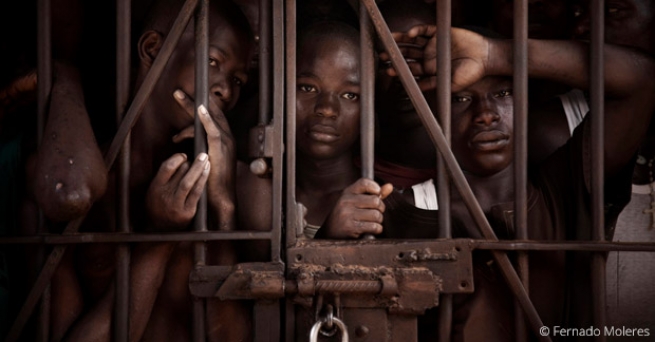 (ANS - Freetown) - Two years ago the World Health Organization declared that the Ebola outbreak in West Africa was over. The epidemic caused about 4,000 deaths and over 14,000 cases of infection. Two years later Sierra Leone has fallen into oblivion. This country experienced one of the longest and cruellest civil wars, and yet the Salesians have always remained close to the people and to young people.

Since 2001 the Salesians have been working for the rehabilitation of hundreds of child soldiers. They have also been caring for children orphaned by Ebola, street children and victims of abuse. Now they have started working with young people in prison.

This is a typically Salesian work. It is happening in Pademba Road prison, where hundreds of teenagers and young people share a cell with adult criminals of all kinds. "Four of us went there, three Salesians and a layman," says Fr Jorge Crisafulli, SDB.

The Salesians have been to "hell on earth" as the prison is called. It was designed for 300 people, but houses 1,876. The smell in the cells is sickening - a mixture of sweat, urine and human faeces. They visited all the prison cells, the kitchen, the infirmary, laboratories and the prison yards. Everything is in ruins, old and abandoned, except for a Catholic chapel built by a missionary many years ago.

Now, the Salesians visit the prison on Fridays. They celebrate the Eucharist, pray, sing, meet teenagers and young people to hear their stories and seek legal help to solve their cases. Those who have left the prison are already over 30 years of age. Several of them are now living in a special house as part of a programme called "Group Home" where they can stay and study how to begin to rebuild their lives.

Fr Crisafulli tells the story of a young man he met in prison, called John Bosco. "I remember saying to him, ‘with a name like that you should not be in a place like this’. He had lost his parents during the civil war and decided to go to the capital in search of work. He was arrested by the police as a potential delinquent."

Today John Bosco is out of the Pademba Road prison and he is able to smile again. His wounds, external and internal, are slowly healing, thanks to the work of the Salesians.