Bolivia - Reduction in violence against women in rural areas 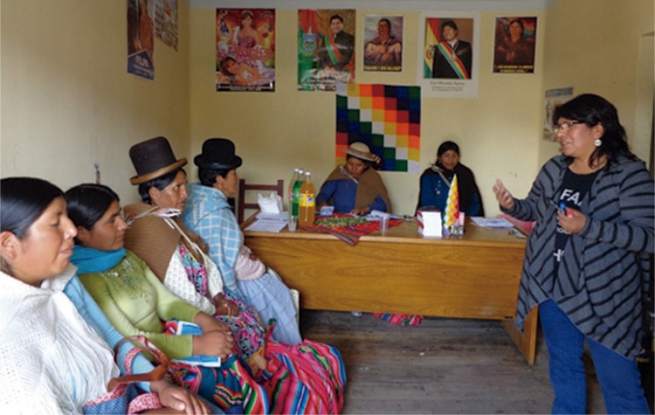 (ANS - La Paz) - Although in the Andes there is an egalitarian vision of the world, in practice, in Bolivia, patriarchy prevails. The man has the authority and exercises his power over women, generating an unequal and abusive relationship. "I came to serve man, I will get out of here dead ... if I speak, I lose my honour, and that will be with my fate." This is the testimony of one of the women taking part in the project. Bolivia is high on the list of 13 countries in Latin America with regard to cases of physical violence against women and is second on the list in terms of sexual violence.

Since the beginning of March 2016, the Machaqua Amawta Foundation, with the support of Extremadura for International Development Cooperation (AEXCID), and the coordination of the Salesian NGO Solidaridad Don Bosco, has been carrying out a project whose purpose is to reduce violence against women in rural municipalities of Chuma, Ayata and Aucapata, in the Muñecas province, Department of La Paz.

The Machaqua Amawta Foundation has identified the need to respond to the discrimination and violence that many women experience in their homes, almost as if it were a regular occurrence, and, in particular, the violence suffered by women of the Muñecas Province.

The project has three main objectives. First, to promote more equitable gender relations in the educational community. Then, to try to strengthen the social organizations in the eradication of inter-family violence and political discrimination. And finally: to strengthen legal services to develop concrete prevention of violence against women and provide adequate and effective assistance.

The women participating in the project hope to be able to achieve a positive change in the attitude of men. This will strengthen the family harmony and lead to the spreading of good values ​​to future generations, i.e., the values ​​of respect, tolerance, solidarity.

Veronica Ojeda, of the Provincial Government of Muñecas, said: "... a woman wants to participate in the meetings, but jealousy and distrust of her husband makes it difficult ... Men think evil. Many women say they have to endure, until he kills me I have to be with this man."