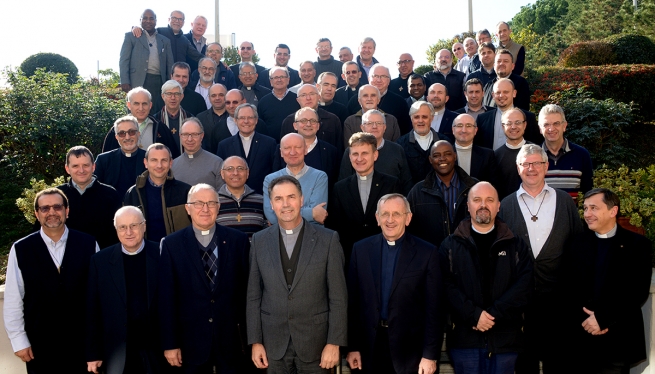 (ANS – Rome) - Since last 2004 the provincials of Europe came already for the sixth time for their regular biennial meeting with the Rector Major and his council, three days encounter (December 2-4) in Salesianum, Rome. These meetings help to bridge the distance between the two regions and many languages of Europe, to share some good practices and especially to discern some priorities of common journey in Europe.

Also during last three days (December 2-4) in the Salesianum, Rome 60+ Salesians - the complete General Council with all provincials of Europe and coordinators of Youth Ministry and Formation - spent a lot of time in listening, sharing and discernment. Main focus was on our mission for the poor youth (refugees and migrants, vocation training centers) and on Salesian formation in Europe.

Group workshop help to discern some priorities for the way forward - like strengthen our presence among the young refugees and migrants (especially non-accompanied minors), formation of our Lay Mission Partners together with the Salesians (suggestion for one European formation center in the Don Bosco Holy places) and reshaping of formation communities around the old continent.

Last but not the least was very moving sharing of Fr Munir El Rai, Middle East provincial, about the present situation of Syria and the two SDB communities of 7 confreres and 2000 youth cared by them in Aleppo and Damascus. UK Salesians invited everybody to their renewed formation house in London - Battersea and the Vicar of the Rector Major shared the work in progress in the international communities of Valdocco and Colle Don Bosco for hospitality and animation.

During the Holy Mass of the encounter’s last day, the Rector Major, Fr Ángel Fernández Artime, was inspired by the liturgy of the second Sunday of Advent to urge the listeners to have hope in facing any challenge, with the certainty that the Lord does justice to the humble. "We have been called to work for justice on behalf of the least ones; this is our brand, the least ones will be our salvation," he said.

Fr. Angel F Artime invited the confreres to continue to pull down the walls between the different provinces and countries, to nourish wider and deeper vision about the future of Salesian Charism always focused on the poor youth. Rector Major share his dream about presence of more younger missionaries who will help to build up inter-cultural, international and inter-provincial communities in Europe with richer dynamics. All present provincial were invited to thinks as European Salesians and share the fresh and lively Charism so much necessary for the youth of today.