Vietnam – The Servant of God Fr. Majcen moves many in Slovenia & Vietnam 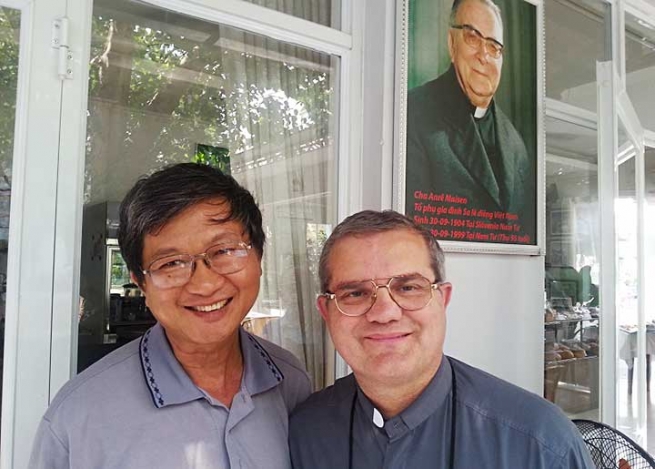 (ANS – Ho Chi Min City) – The Servant of God, Fr. Andre Majcen (1904-1999), called the Don Bosco of Vietnam was a well known fatherly figure during his life time in China, Vietnam and Slovenia. While his cause of Beatification proceeds, new initiatives also flourish from his testimony: Mr. Francis Nguyen, one of his disciples, and the Don Bosco Past Pupils, in synergy with the Salesians, launched a wonderful initiative in HCM City - 'Bisto Mai-Sen' - a vocation training center for rural youth nearby the HCM airport.

There, about 120 youngsters (young men and women) have the opportunity to learn bakery, cooking, and hotel or restaurant skills. This apostolic initiative brings together a service to young people in need and spreads the fame of holiness of “the Don Bosco of Vietnam”.

Fr Andrej Majcen SDB was a missionary in China and in Vietnam (1935-1979) and then, after returning to Slovenia, a confessor until the end of his days; forty-four years of missionary apostolate and twenty of missionary promotion in Slovenia. His reflections and meditations, collected in his diaries (more than 6000 hand-written pages), are the expression of a profound Christian life and a personal striving for spiritual growth.

The Salesians of the Provinces of Slovenia and of Vietnam, who knew Fr Majcen and can attest to the exemplary nature of his Christian and Salesian life, are promoting his cause. The Congregation for the Causes of Saints, in December 2008, issued the nihil obstat for the process for the beatification of Fr. Majcen.

Now, another piece of good news related to this Servant of God comes from his homeland, Slovenia. The vice-postulator of his cause, former provincial Fr. Alojzij Snoj, shared the news that the Diocesan tribunal for the cause of beatification in Ljublanja, in its session of November 18th, “officially accepted the testimonials deposited in Vietnam as part of the documentation of the process. I hope that in a few months we can also finalize the historical commission.”

The General Postulator Fr. Cameroni is confident that the diocesan phase of the beatification process in Slovenia may be concluded before the end of next year 2017. And, of course, he invites all the members of the Salesian Family members to know better the Servant of God and to pray to him.