Spain – “My wish is that EDEBÉ continue to touch the hearts of children and youth”: on the celebration of the XXV Edition of EDEBÉ Award 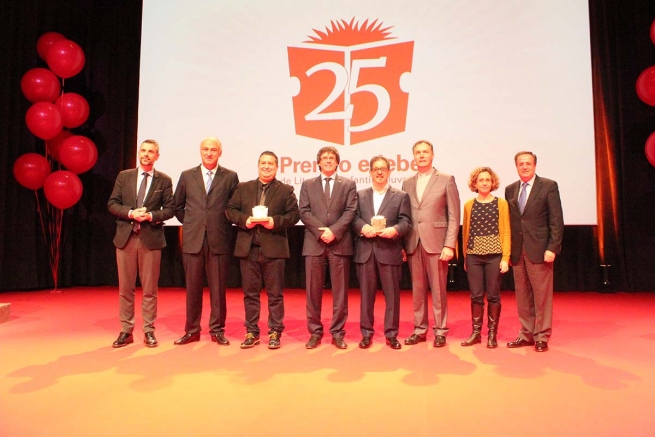 (ANS – Barcelona) – On January 26th, the 25 years of existence of the EDEBÉ Award for Children and Young Adults’ Literature were achieved. Since January 1993 numerous works have been read and given awards, many novice authors have been discovered and a good many youth have been initiated to the pleasure of reading. To celebrate this great event, yesterday in Barcelona there were the Rector Major of the Salesians, Fr. Ángel Fernández Artime, Fr. Filiberto González, General Councillor for Social Communication, Fr. Stefano Martoglio, Councillor for the Mediterranean Region, and several important Spanish authorities.

In fact, the event was also marked by the presence of the Secretary for Culture of Spain, Dr. Fernando Benzo Sáinz, the President of the Generalitat of Catalonia, hon. Carles Puigdemont, both Salesian Provincials of Spain, Fr. Cristóbal López Romero (SMX) and Fr. Juan Carlos Pérez Godoy (SSM), and the Director of EDEBÉ, Antonio Garrido.

In this 25th edition of the EDEBÉ Award, several works were presented: 187 books in the children’s category and 116 in the young adults’ category, written in Castilian (258), Catalan (30), Galician (10) and Basque (5). During the preceding 24 editions, 30 works in Castilian, 13 in Catalan and 4 in Galician were given awards. This is a wonderful work to the benefit of the children and young adults of the entire world, books that shaped not only the mind and culture, but also the spirit of minors.

The winners are Ricard Ruiz Garzón (Barcelona, 1973), with the novel "La Inmortal” (The Immortal), and Francisco Díaz Valladares (Villamanrique de la Condesa – Siviglia, 1950), with the novel "Tras la sombra del brujo” (Behind the Shadow of the Sorcerer).

“I wish to thank all those who made this 25 year-old story possible, a story of service to culture possible – the Rector Major said –. My wish is that this contribution may continue. This reality is part of our identity, commenced by our Don Bosco. This is very important for the Salesian Family, and my presence here is to say to all ‘ thank you for so much work and for so many sacrifices!’”.

Then the Rector Major concluded: “My wish is that EDEBÉ continue to touch the hearts of children and youth”.