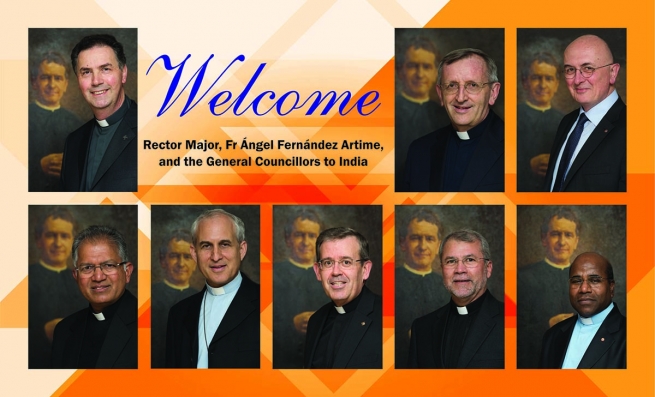 (ANS - Rome) - The Team Visit is an instrument of animation by the Rector Major and the General Council. Through it, the leaders of the congregation can assess the progress underway in the various Salesian regions and ensure convergence and unity with respect for diversity. Tomorrow, 28 February the Team Visit to the South Asia region starts in Chennai, India. It is the first of the series of seven visits to take place in the coming months in the seven Salesian Regions.

Traditionally the Team Visit is attended by the Rector Major, his Vicar, the Councillors of the different Sectors - Formation, Youth Ministry, Missions, Social, Communication - and the Regional Councillor of the region. They meet with the superiors of the different Salesian Provinces, etc. of each region, members of their provincial councils, those in charge of offices and positions of great importance in the regional context, and also people outside the Salesian Congregation who can offer authoritative views and contributions.

The Visit which opens tomorrow in Chennai will end on Saturday, 4 March. It comes six years after the previous one (Bangalore 2011), and is significantly positioned in the middle of the six-year period of the Rector Major, Fr Ángel Fernández Artime. The purpose of the Team Visits is primarily to assess the level of implementation of the guidelines of the 27th General Chapter, to reflect on Salesian statistics and to outline the future direction of the Salesian mission to the young people in each region.

In the specific case of the Team Visit to South Asia, the intention is to be able to set up procedures and systems to ensure greater visibility and unity to the vast galaxy of Salesian works operating under the aegis of Don Bosco and to realize a large Indian national network that can be more effective in meeting the needs of young people.

The title of the Team Visit is "Re-visioning and re-signification of Salesian Mission in South Asia".

Looking ahead to the Visit and to prepare themes and content, the Conference of the Salesian Provincials of South Asia, led by Fr Maria Arokiam Kanaga, Regional Councillor, has, after a long process that involved all jurisdictions in the region, drawn up a strategic plan, which will be presented during the Team Visit.

After careful observation and meetings on the various teams, the Rector Major, with his councillors will release the concluding observations.