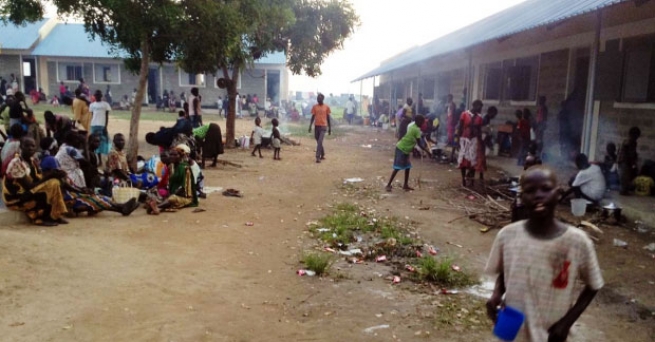 (ANS - Gumbo) - "The image of Ethiopia in 1984, with children emaciated to the extreme, and over a million deaths from lack of food, have remained in the minds of many Westerners as a reminder of a terrible word: famine" - Carlos Laorden.

"There are cases of deaths from starvation. We do not know how many, because we have no access," says Luca Russo, Special Adviser to the FAO, referring to the current situation in South Sudan. In this catastrophic situation, the Salesians continue to stay with the people.

The limited resources of the Salesians are not sufficient, but are helping to alleviate famine in parts of southern Sudan. Hundreds of families flock to the Salesian houses in search of shelter and food, as they do not feel safe in the midst of violence and it is impossible to buy food, due to high inflation and drought.

The top priority of the Salesians in recent years has been caring for  displaced people fleeing from violence and coming to the Salesians in search of safety and food for their children. However, the situation has worsened in recent weeks because of the famine.

Fr Shyjan, SDB says "Our Salesian communities are working hard to serve everyone. Unfortunately, the Salesian House in Morobo was temporarily closed because of violence, looting and the destruction of our mission.  At Gumbo, we have two camps for internally displaced persons, with capacity for 1,000 families (about 10,000 people), but we also help hundreds of families who are starving because of the crisis. Our centres at Mori, Mafao, Mogri, Belyngang and Niseethy also need constant help because food prices have increased by 1,000% and it is impossible for people to buy even the bare essentials.”