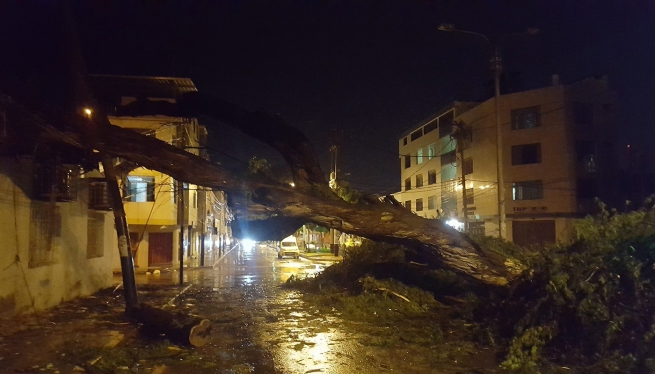 (ANS - Piura) - Peru is experiencing the negative effects of climate change, in particular due to the torrential rains of recent weeks. This weather phenomenon is causing major emergencies, disasters and floods in Piura (in the north) and other regions of Peru.

In recent weeks, heavy rains and landslides (floods with water, stones and mud), hit the southern and central zones, including Lima, the capital. According to official figures the death toll is 62 people and 11 remain missing.

The heavy rains have affected 20 regions of the country and have caused, according to official reports, more than 62,000 disasters, affecting 546,000 persons. Homes and schools have been destroyed across the country. About 7,974 houses collapsed. 1,231 kilometres of roads were destroyed.  Numerous bridges have become impassable, and vast areas of agricultural land are affected.

According to the Salesian Mission Office, the situation in Peru at the moment is very delicate. The floods have caused health emergencies in the population and the continuing deterioration of housing. In addition, services of drinking water and sewage have collapsed, producing an increase of acute diarrheal diseases.

The department of Piura is one of the regions highly vulnerable to flooding. Given the conditions of the torrential rains and the flooding of the river running through the city of Piura, it was declared a state of emergency and the population calls for urgent help.

"In the face of these natural disasters, the most affected are the students of the Don Bosco Salesian College of Piura as well as CEO and Bosconia and other educational institutions of the city. For lack of access to transportation they have not yet been able to begin academic work. in addition, many students' homes have been affected," says Alexander Guerrero, Salesian spokesman in Piura.

The first support from the Don Bosco Foundation will focus on the city of Piura, where the Salesians have two houses and where many vulnerable people are living.