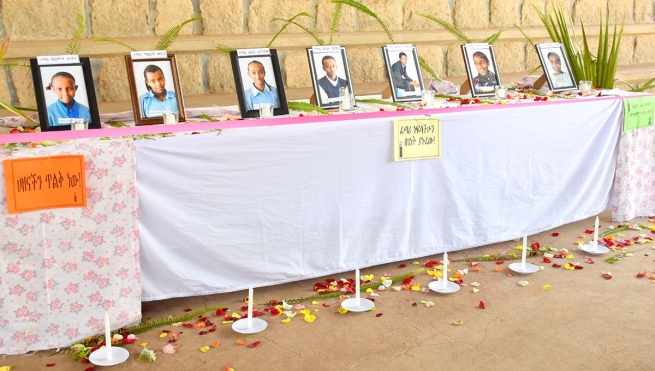 (ANS - Addis Ababa) - Among the 115 confirmed victims of the rubbish landslide that occurred on Saturday 11 March in the Koshe landfill on the outskirts of Addis Ababa, there are seven students from the Don Bosco Centre at Mekanissa, a suburb of the capital. The tragedy, for which the Ethiopian government has declared three days of national mourning, has directly affected the entire educational community.

Of the seven victims who attended the Don Bosco Centre, two were children helped by a food programme run by the Salesian Brother Donato Galetta; one was attending primary school, two were in middle school and two in high school. In addition, one of the workers at the Salesian Centre lost his entire family in the tragedy, including his parents and relatives. He remains completely alone.

A ceremony in memory of the victims of the tragic accident was held at the Salesian campus on Friday 17 March. The entire educational community of more than 2,000 students was neatly placed in rows in absolute silence, carrying candles and bouquets of flowers to mark a final farewell to their dead comrades.

The Don Bosco Centre at Mekanissa began its activities about 18 years ago on the outskirts of Addis Ababa, precisely to serve the poor and marginalized population of the areas of Koshe and Kore. The Salesians are working to further expand the facilities of the centre. On 1 March last they had the inauguration of a new administration building, the result of collaboration with Msgr Pier Giacomo Grampa Bishop Emeritus of Lugano.

The Koshe landfill is the largest in the country and has been "home" for hundreds of people who swarmed around it looking for materials to be recycled. It was closed last year by the city authorities, who had asked the local population to move to the new landfill outside Addis Ababa, but the opposition of the residents who live near the new site forced the authorities to go back on their decision.