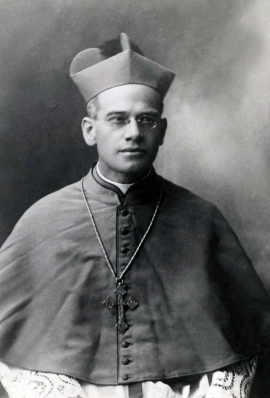 (ANS - Rome) – On 27 February 2017, Pope Francis authorized the decree of Venerable of the Servant of God Octavio Ortiz Arrieta Coya, (Lima, 19 April 1878 - Chachapoyas, 1 March 1958) bishop of Chachapoyas and first Peruvian Salesian. To mark the occasion the Rector Major, Fr Ángel Fernández Artime, wrote a letter to all Salesians and Salesian Family members, to emphasize the pastoral and spiritual value of this recognition and enhancing this rich testimony on the great tree of Salesian holiness.

Octavio Ortiz Arrieta Coya spent his early years as an oratorian, a student and then a Salesian engaged in the works of the sons of Don Bosco in Peru. He was the first Salesian formed in the first Salesian house of Peru. It was in Rimac, a poor neighbourhood, where he learned to live an austere life of sacrifice.

From the first Salesians who arrived in Peru in 1891, he became familiar with the spirit of Don Bosco and the Preventive System. As a Salesian of the first generation, he learned that service and self-giving would be the hallmark of his life. Even as a young Salesian he assumed important responsibilities, such as the opening of new works and the direction of others, with simplicity, sacrifice and total dedication to the poor.

The second part of his life, from the beginning of the 20s, he lived as bishop of Chachapoyas, for 36 years, distinguished by the way he planned and carried out the pastoral tasks entrusted to him. In vocation ministry he gave concrete support to his seminarians and priests. He gave human and catechetical formation to the young. He also devoted himself to the pastoral care of the family, attentive to the formation of new families and supporting families in crisis situations or irregularities.

"His whole life was dominated by the primacy of the salvation of souls: a salvation which he extended also to his priests. He encouraged them to counter the temptation to settle for easy certainties or to seek positions of greater prestige, urging them to engage instead in pastoral work. It can really be said that he reached a high level of Christian life. He was a pastor who embodied pastoral charity in an original way, seeking communion with the people of God, reaching out to the most needy and witnessing a life of evangelical poverty.”

This witness to Salesian life lived in the episcopal ministry deserves to be known and appreciated in a special way by the Church and the Salesian Family of Peru, and also by the great number of Salesian Bishops who can see in him a model and an example of generous pastoral dedication according to the apostolic charism of Don Bosco.