Tanzania – The Rector Major has arrived 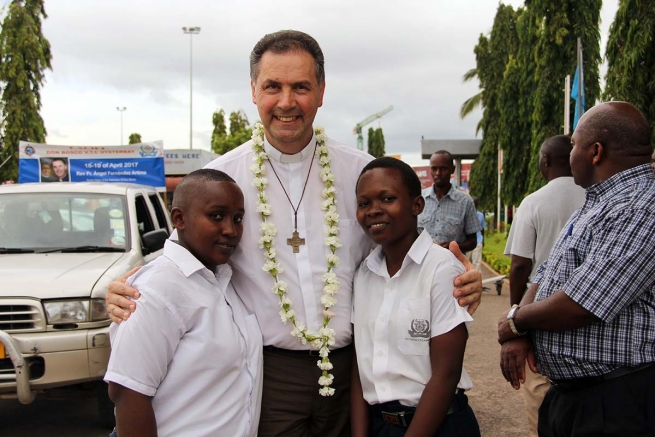 (ANS – Dar es Salaam) – The Rector Major touched down at Dar airport at 2.10 p.m, 18th April 2017, half an hour before the scheduled time of arrival. He was met by group of Salesians including the Provincial and Vice-Provincial, a few representatives of the laity and students of the Vocational Training School at Oyster Bay, Dar es Salaam welcomed the 10th successor of Don Bosco.

With the police escort, the convoy carrying the Rector Major worked its way through the messy traffic of the city, and arrived at Don Bosco Oyster Bay around 3.00 p.m. At the gate the Rector of the community clothed the Rector Major with an African shirt making him an “African” at the first place of his visit in AFE.

“I am very happy to be here with you in Tanzania, special greetings to all the laity who collaborate with the Salesians …What I find in Africa is the smile on the face of the young people …though my journey was 28 hours long and I am a bit tired, it is not long when I journey to meet young people”, said the successor of Don Bosco in his short greeting to the young people.

Later in the evening the Rector Major blessed and inaugurated the newly built (not completed) Don Bosco Net headquarters sponsored by Via Don Bosco based in Belgium, for Tanzania.

After that he gave a lengthy talk to the novices and the Salesians, and also answered many questions they had. For this, two other Salesians from the nearby community, Don Bosco Upanga, Dar es Salaam, a youth center, and sisters of Mary Immaculate (SMI) who are working in Dar es Salaam were also present.

By now he has met over 7000 Salesians from different parts of the world, during his journeys. He exhorted everyone to remember three points which are very important: Consecration, fraternal life and our passion for the young, especially poor youth. He asked the novices to be very open to their formation guides for the sake of their vocation and for the sake of the young.  According to the Rector Major, the greatest challenges faced by the Congregation are lack of deep spirituality, poor community life in some places and finally some Salesians are forgetting the poor and the marginalized.

The day came to an end with supper together with the Salesians, novices and some of the youngsters who were present for the occasion and a good night talk by the Rector Major.