Peru - An image that has travelled the world: today tribute is paid to the artist, Fr Jorge Mauchi, SDB 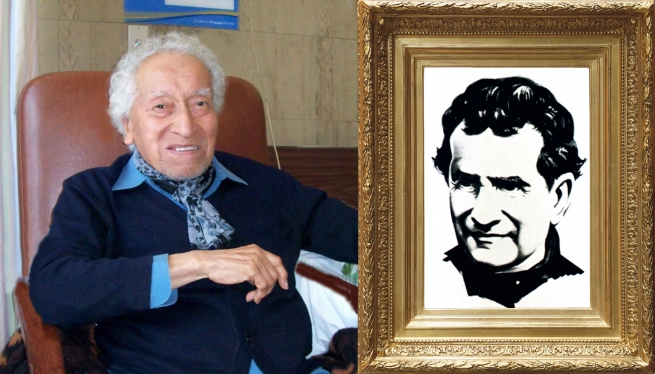 (ANS - Lima) – Fr Jorge Mauchi is a Salesian of the Province of Peru (PER) creator of one of the best known drawings of Don Bosco's face. It's a very simple work of art, with bold strokes depicting the gentle, serene and peaceful face of the Saint of Youth. Today the Province is launching an exhibition of Fr Mauchi’s works of art, as a tribute to his extraordinary and interesting career as an artist from 1955.

Fr Mauchi was a teacher for generations of students at the Salesian Institute in the Breña district of Lima. His free time was devoted to painting, art, sculpture and music. Many of his past pupils remember him with affection and gratitude. One of them is Mr. Ruperto Macha, who recalls: "I learned a lot about art. The image of Fr Jorge is fresh in my mind. Many important religious paintings of his are to be found in Peru."

On 7 April, an exhibition in recognition of the extraordinary career of Don Mauchi was inaugurated at the Salesian Technological Institute. It is a well-deserved tribute to this artist who has been working for 62 years. The opening ceremony was attended by Salesians, Daughters of Mary Help of Christians, past pupils, friends and relatives of the artist.

Fr Mauchi is now 92. He is one of the personalities who contributed to the artistic production of the Basilica of Mary Help of Christians in Lima. One of his most important works is the altar dedicated to St. Martin of Porres (1964).  He also decorated the rear grille (1999) and the series of fourteen paintings of the Stations of the Cross (2000).

"Mauchi" is a complete artist, who is best remembered as a painter, but he also has had notable success in drawing, as demonstrated by the great success of one of his portraits of Don Bosco which has spread around the world since the 70s.

The exhibition which opened in Lima has an important value because it presents the work of a Salesian who exercised most of his apostolate as an artist, and worked in search of that "way of beauty" which can lead others to faith.