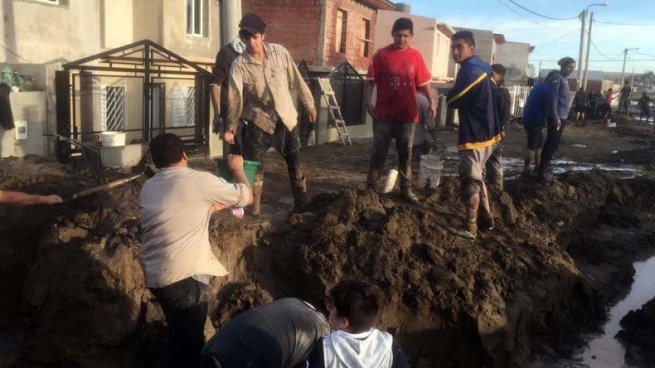 (ANS - Buenos Aires) - The heavy rains affecting various places in Argentina have caused huge losses in different parts of the country. For this reason, "Exploradores de Don Bosco" have mobilized, along with many other groups, to help the most needy.

In the north of the country, the floods that hit Tucuman (and caused floods and blocked roads) have passed. The leaders of the 8th Battalion have distributed the offerings collected by the families and students of the Salesian House of General Belgrano: clothing, water, non-perishable food, personal belongings and even food prepared by their own mothers. This was like a symbolic embrace to all the people affected by the rain.

The scouts paid their own way and travelled voluntarily to the most affected areas to deliver all the donations to the places where their intervention was most urgent. "There were very few easy-to-navigate places, where it had rained. There was still plenty of water and mud, and many mosquitoes. In some places the water was waist-high. It was a very sad situation, but in the midst of despair we found people who showed us that we can always overcome adversity."

In the city of Comodoro Rivadavia, in southern Argentina, the 71st Battalion of the Exploradores, dedicated to Mary Help of Christians, "helped the flood-affected people. They went to the San Cayetano district and worked at cleaning the courtyards and the various environments and creating channels to drain away the excess water.

Leonard was one of the participants in this initiative. He explained that their activities started on the same day as the flood with a group of volunteers called together by WhatsApp.  The young people decided to give a hand. "We looked at who we might be able to help and we went to San Cayetano as often as we could. From there we were able to reach the different neighbourhoods,” the young man said.

"The young people are used to doing whatever they can. I have seen great participation from the community, but the contribution of the young people in general has been remarkable. Twelve-year-olds, with a shovel in hand, are helping their neighbours and even strangers just for the sake of helping. In the midst of all that we are suffering, this is very nice to see,” Leonard concluded.