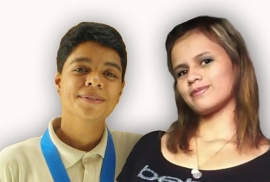 (ANS - Caracas) - Venezuela has been going through a very difficult political and social situation in recent times. Pope Francis recently said, referring to Venezuela: "I pray for this people, who are very dear to me, and I urge everyone to persevere without growing tired, avoiding any violence and seeking political solutions." On 19 April, peaceful demonstrations took place in the country to deliver to the 'Defensoría del Pueblo', the state agency that oversees human rights, a document accusing the government of President Nicolás Maduro of a coup d'état against the National Assembly.  On the margins of the events, two Salesian past pupils were killed.

Carlos José Moreno Barón, 19, was not taking part in the protest march. He was on his way to a football field at Chuao, but he did not reach his destination.

It was about 10:15 in the morning when Carlos José's plans for the future were shattered near Estrella de San Bernardino Square. A motor-driven group linked to the collective supporting the government opened fire against opponents. The doctors did all they could but Carlos José had been struck by a bullet in the head and nothing could be done. He had been a student at the St Francis de Sales Institute in the Sarría district, and was a member of the Salesian Youth Movement.

On the same day of protests, in San Cristóbal in the State of Táchira, a motorcycle group allegedly linked to local government support groups fired on Paola Ramírez Gómez, 23, as she was passing in front of Piazza San Carlos, returning from a job interview.  She also was not participating in the protests.

Paola was a Salesian past pupil from the Institute of Táriba. Her death was instantaneous, as witnessed by a video taken on a security camera on a nearby building. She fell after being shot by armed members of a pro-government "collective".

The Prosecutor General Luisa Ortega Díaz has given signs of independence of the government to which she belongs and has asked the security authorities to guarantee freedom of expression. "I appeal to the political agents who convene the demonstrations. It is a constitutional right to convene peaceful demonstrations and these should not endanger the physical safety of the demonstrators," she said.