RMG - A new type of media for Salesian Mission Day 2017 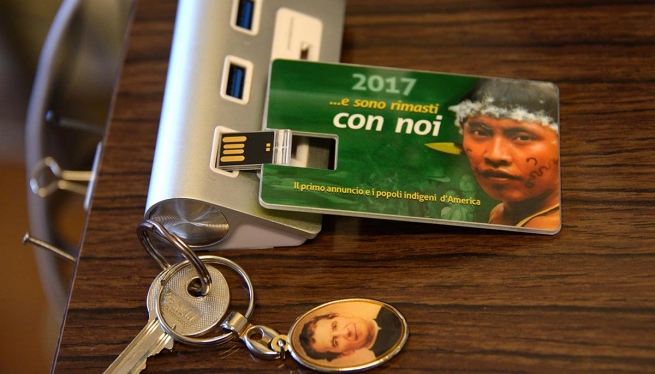 (ANS - Rome) – In order to offer the best possible service in transmitting the footage of Salesian Mission Day 2017 to all the continents, the Departments of the Missions and Social Communication, in collaboration with "Missioni Don Bosco" in Turin, have developed a new mode of distribution.

The traditional DVD containing videos and additional materials for Salesian Mission Day is being replaced this year by a USB key. This is an option that preserves the quality of the filmed material in high definition, is easy to transport and distribute, can be played back on screens and computers, and allow for the transfer or copying of the contents.

Distribution of the USB key has already begun at the meeting of the Missionary Animation Delegates of the Inter-America and Southern Cone regions, at Retiro das Rosas, not far from Belo Horizonte in Brazil.

With video clips on USB flash drives, it is possible to show the work of the Salesians for the Yanomami Indians in two important missions in the Manaus Province, with the Mixes of the State of Oaxaca, Mexico, and the Chinantecos, another indigenous group living in the same state, and also with the Mapuche, an indigenous people living in the southernmost parts of Argentinean Patagonia.

The compatibility of the USB keys is guaranteed for all operating systems from Windows to Mac OS. The speed of the device depends not only on the interface but also on the type of flash memory used.

Videos are also available on the ANSChannel YouTube, in 5 languages.