Tanzania - The Rector Major in Tanzania and Kenya 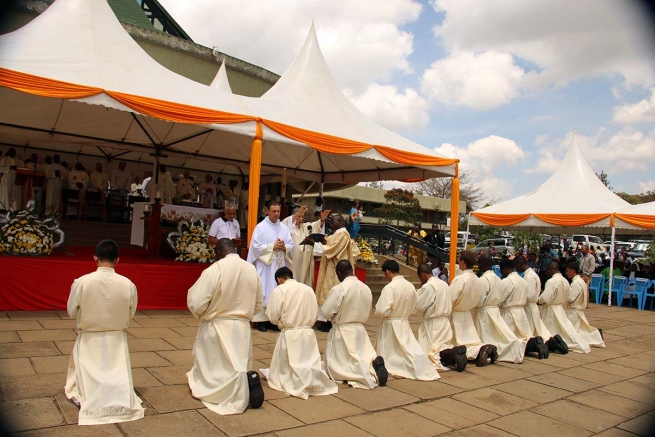 (ANS - Didia) – In Didia on 21 April, the Rector Major, Fr Ángel Fernández Artime, visited the secondary school where around 2,000 people, pupils and staff of the school, gathered for a cordial meeting with plenty of signs of affection. The meeting included the celebration of the Eucharist. After the Mass, Don Bosco's successor met with the Salesians for a moment of fraternal conversation. He explained the main reason for his visit, which was to meet the Salesians. He spoke to them about the beauty of the congregation and at the same time the challenges ahead.

The programme ended with a quick lunch and greetings from the Salesians. He then departed for Moshi where the Rector Major was met by Salesians and members of the Salesian Family with a welcome party with traditional song and dance.

On 22 April, the main event of the day was the 25th anniversary of the Philosophical Training Centre. After Mass there was lunch at which Bishop Isaac Amani Massawe of Moshi was present.  In the afternoon,  Don Á.F. Artime, met with the Salesian Cooperators and Past Pupils.

Departing from Tanzania in the evening, the Rector Major landed at Nairobi, Kenya. He was met by some Salesians who gave him a wonderful welcome. The main event of 23 April was a solemn mass during which twelve Salesians made their Perpetual Profession. Prior to Mass, the Rector Major prayed at the relic of Don Bosco in the upper church. After Mass in the Shrine of Mary Help of Christians, he greeted all the Salesians, the Salesian Family and all the collaborators. He addressed a special greeting to young people and their mothers. In the afternoon, Fr Ángel Fernández Artime met with the young people and answered their questions.

In the evening, the Rector Major attended the First Congress of the Salesian Brothers of the Africa-Madagascar Region. He told them: "In my three years as Rector Major, this is the first time I have met with so many Salesian Brothers together, […] I invite you to live your identity clearly. You are not second-class Salesians, you are very much appreciated in the congregation."