Kenya – The Rector Major in the Kakuma refugee camp 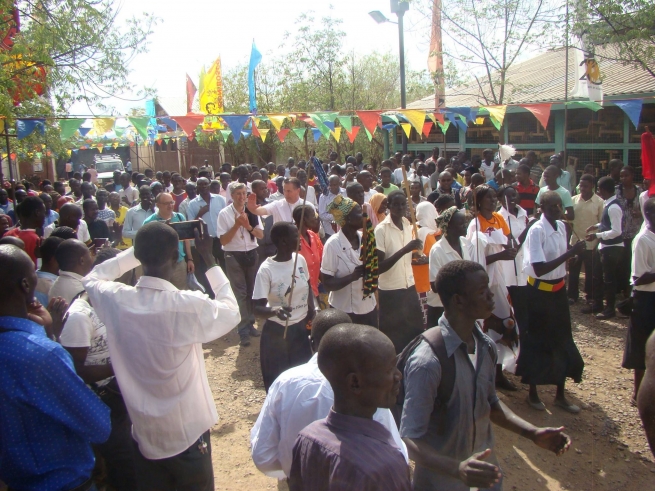 (ANS – Kakuma) – Kakuma refugee camp, situated in the northern part of Kenya, is home to over 200,000 people from about twenty countries which have had and are having conflicts. The Salesians have a community inside the camp where they have a parish with several out-stations, taking care of the spiritual needs of the inmates who are Catholics. They also have a technical school that teaches various technical skills and English to the refugees. There are also three satellite technical schools that are run by the Salesian community. The Salesians are the only people, apart from the refugees, who reside inside the camp.  All the others, religious, NGOs and the staff of other UN agencies reside outside the camp. This is where the Rector Major paid a visit on Monday 24 April.

By the early morning UNHCR flight, the tenth Successor of Don Bosco and his team took off to the Turkana region where the camp is situated. On arrival, he was welcomed by the Bishop of Lodwar Diocese in which the camp is situated and the director and a few lay people from Don Bosco. On his way to the Salesian community he was given a tour of the place where a new technical school is to be built outside the camp. This will also serve the host community, the Turkanas. At the gate of the Don Bosco institution, a group of refugees welcomed Fr Artime with songs and traditional dance.

After breakfast, the Rector Major met with the community. First of all, he asked them about the situation in the camp, their hopes and dreams for the place and the challenges they are facing among this people who have had to flee because of conflicts. He assured them that such a project is at the heart of the congregation. He told them, “we speak of our preference for the poor but you are in the midst of them”. He thanked each one of them for their dedication and service for the people there who are at the heart of Don Bosco’s mission. He told them that our very presence there is a witness and we need to be just accompanying them. From his words and sentiments it was clear that this was a special visit for him and he had been looking forward to it. He promised to help the mission from the congregation.

After meeting the confreres, there was a moment of interaction with the people. There were dances and speeches and words of thanks and appreciation for the work done by the Don Bosco mission in the camp. One of the dances by the Rwandese community was so graceful that at one moment the Rector Major himself joined them. Then there was a photo session.

Later there was lunch with the staff and the NGOs and the personnel from UNHCR. Lastly our “Don Bosco today” was driven through the camp, just passing through the satellite technical schools, for him to have some idea of them before he flew back to Nairobi.

Fr A. F. Artime was very struck by his visit to the camp in Kakuma. He shared on his Facebook page that in the camp he was able to meet Jesus in the person of the suffering people.

In the morning of Tuesday 25 April, the Rector Major met with the Provincial Council. Later in the afternoon, after meeting the lay staff and workers of Don Bosco Upper Hill, he met the Salesians who are working in Kenya and the students of Theology. Once again he told them, “We have a beautiful congregation.” Then he went on to  say that this does not mean that we have no challenges,  and he told them the many challenges the congregation is facing.

After the talk, there was time for questions. The day came to an end with Evening Prayer followed by supper. It was a beautiful moment of sharing and with the successor of Don Bosco.