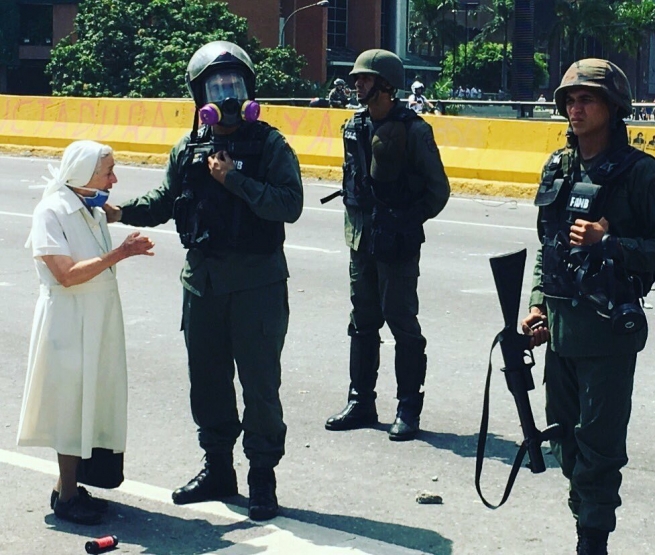 (ANS - Caracas) - A video has gone around the world showing an elderly religious sister trying to talk to a soldier. She is a Daughter of Mary Help of Christians who has become the icon of the huge peaceful demonstrations marches that are taking place in Venezuela to protest against President Nicolás Maduro.

Millions of people have taken to the streets to claim their rights, including thousands of religious, male and female. "Civil and peaceful protest is not a crime. It's a right! It cannot be controlled by excessive repression," according to a statement from the Bishops' Conference of Venezuela published a few days ago. Sadly, 26 people were killed on the margins of the demonstrations held in Caracas, the capital of the country, and in other cities.

"The Venezuelan Bishops Conference” - the statement said – “invites all citizens, believers in Christ and men and women of good will, to act according to their conscience, according to democratic principles and the laws of the country, and in this way to exercise the right to protest and demonstrate publicly with respect for people and property and in a responsible and peaceful manner."

Pope Francis also sent a message of solidarity and brotherhood to the Archbishop of Caracas, Cardinal Jorge Urosa Savino, following the recent attacks by radical groups on the Church and on the Cardinal himself. They even went so far as to interrupt Mass in the Basilica of St Teresa.

In this context, on 22 April, thousands of Venezuelans participated in a March of Silence in memory of those who died in the protests. Many prayed as they walked. Among them was Sister Esperanza, a Daughter of Mary Help of Christians (FMA) whose image alongside a member of the Bolivarian National Guard appeared on the front pages of many newspapers. "They did not let us pass," the nun said, complaining that they had started shooting. For this reason, she said, "I approached the leader and asked him how this was possible: if you are Venezuelans, we are Venezuelans too." And she added "I'm not afraid of you."

To discredit Sister Esperanza some people circulated the rumour that she is not Venezuelan. The cross that she wears around her neck is a sign that is a "Daughter of Mary Help of Christians" and that she carries the power of Christ Crucified in her heart.