Venezuela - Fr Méndez: "I feel obliged in conscience to address all of you" 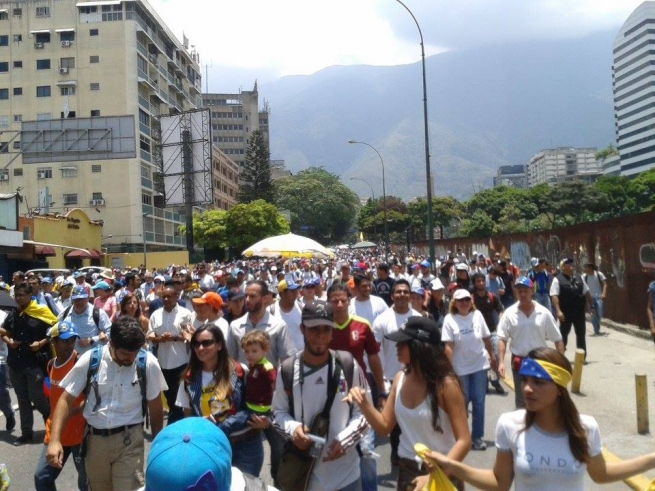 (ANS - Caracas) - The situation in Venezuela is worrying the whole world because millions of people are on the brink of a fratricidal war. Great protests are taking place in the streets of Venezuela, and many priests and religious are taking part in them.  "We are carrying this cross just as the people have to, at national and international level, because of a nefarious government," said the Bishops' Conference of Venezuela. In this situation, the Salesian Provincial in the country, Fr Francisco Antonio Méndez Serrano, SDB, recorded a video message expressing his concern about the serious social crisis.

Fr Méndez stated his position "in the face of serious abuses against human rights and freedoms, and the many deaths that have occurred in recent weeks in the context of a difficult political and social situation for Venezuela".

"It has been a year of great turmoil in the country," said Fr Méndez. “I feel obliged in conscience to address all of you, above all the people who govern us (...): most Venezuelans do not want to continue in the direction you have planned."

From all over the world messages are coming for a solution of peace, justice and respect for human rights. Many countries are asking Nicolás Maduro's government for a peaceful exit and cessation of violence and death, as 29 people have already died in the past few days.

In the midst of this uncertainty, Bishop Mario Moronta of San Cristóbal has invited the faithful to join this Thursday 27 April, in an "intense day of prayer" and he added: "Denying that there is hunger and that many need medicine and care is to be blind to a reality that affects many."

Fr Méndez says that many Venezuelans do not opt ​​for socialism "which has brought hunger, poverty and backwardness". Bishop Raúl Biord, SDB, of La Guaira, noted that the "political model that wants to impose the so-called socialism of the 21st century (a socialist revolution that claims to be communist) has led to poverty and exclusion for 18 years. Certainly, it has caused and is causing the hunger and death of many innocent people."

In this context, the Salesian Rector Major, Fr Ángel Fernández Artime, sent a message in support of his confreres and the Salesian Family in Venezuela.