RMG - Towards the Beatification of Fr Titus Zeman 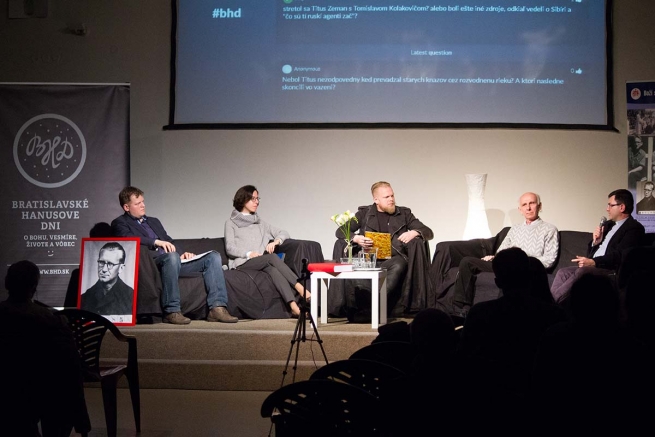 (ANS - Rome) - On 27 February 2017, Pope Francis authorized the promulgation of the Decree of Martyrdom of the Salesian Priest, Fr Titus Zeman, who in the 1950s and 1960s, under Communist totalitarianism in Czechoslovakia, gave his life for the defence of the ministerial priesthood and the saving of vocations. There are now many initiatives to help people to get to know more about this new martyr who worked hard for the Church and for vocations.

An important initiative – in preparation for his forthcoming beatification on 30 September 2017 - took place in Bratislava on 20 April. The Ladislav Hanus Foundation hosted an evening of study and a debate intended especially for university students. It was entitled "Titus Maximus" and explored his spiritual message and its relationship to his time. (Http://www.hanusovedni.sk/archiv/titus-maximus/).

The moderator of the event was a presenter from the Slovak Radio "Pišta Vandal". The participants included a Salesian, Fr Pavol Grach, who focused mainly on Fr Titus Zeman’s Salesian charism and helped to reinterpret his life in the light of Scripture; František Neupauer, a historian who contextualized this martyrdom within the political-social climate of the  time; Michal Titus Radošinský, a nephew of Venerable Titus and a living memory of his family tradition. Also present was Lodovica Maria Zanet, author - with Dr. Helena Barátová - of the Positio super martyrio of the Servant of God. She was asked to briefly illustrate the meaning and purpose of the Process and to offer a re-reading of his martyrdom from the viewpoint of people who grew up in a Western European country.

Titus Zeman emerged from the meeting as an increasingly lively and concrete person.  There was, among other things, a focus on his physical fragility, on the fear and anguish he experienced before torture and death, and on the doubts and the certainties he brought to prayer. Emphasis was laid on the “vocation within a vocation” in January 1951 which overcame all resistance and led him to devote himself irreversibly to the saving of vocations and allowed him to pass from fear to joy. His great spiritual strength could be seen also in the moments of "the dark night", to prove, as he himself said, that it was not by his own strength, but with the help of the Ecce Homo, that he was able to enter that Calvary without being totally crushed.