Peru – Transfer of Remains of the great Salesian Missionary Fr Bolla to Kuyuntza, the place where he spent his life 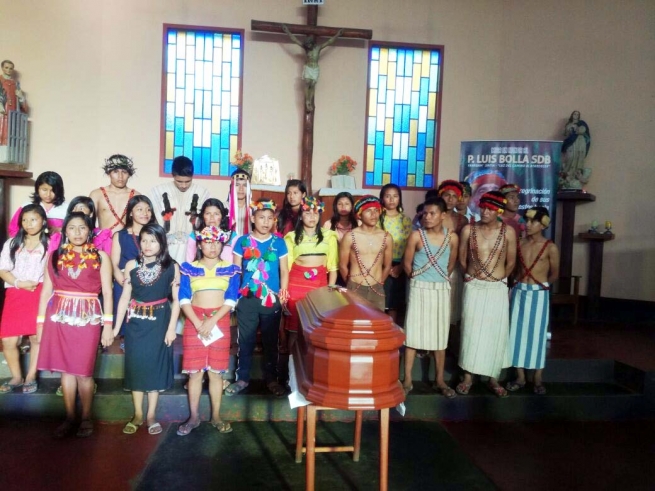 (ANS - Yurimaguas) – On 5 May, in the presence of several Salesians and some relatives from Italy, the remains of the great Salesian missionary Fr Luis Bolla were exhumed. In the afternoon of the same day, the remains were transferred to the Basilica of Mary Help of Christians in Lima-Breña, where they remained for a few days before they were finally taken to Kuyuntza, a locality inhabited by the indigenous Achuar, where Fr Bolla "made the choice to be one of them, live with them and like them and, above all, for them. " And now he will remain with them.

The Eucharist celebrated in the Basilica of Mary Help of Christians in Lima-Breña was a moving ceremony that saw the participation of many members of the Salesian Family of Peru and hundreds of faithful, including Fr Bolla's nephews who came from Italy, and a delegation of the Salesians of the Ecuadorian Province. They all came to honour Fr Bolla.

During the celebration, Fr Manuel Cayo, Salesian Provincial in Peru, recalled the missionary and evangelizing work of Fr "Yankuam Jintia" as he was called. (In the local language it means "Path of Twilight").  Fr Vicente Santilli recalled his constant struggle to defend the indigenous Achuar people from violence and narcotics, and said that he "gave soul and body to accompany the Achuar in their organization and development."

"Every missionary is a work of art of the Lord," said Fr Guillermo Basañes, Councillor General for the Missions. We can imitate their docility to the Spirit, and allow ourselves to be shaped by the Lord who gives life, as Fr Bolla did."

On 6 May, in the presence of a delegation led by Fr Cayo, the remains of Fr Bolla were removed to the Vicariate of Yurimaguas, where Mass was celebrated on Sunday 7 May. Subsequently Fr Bolla's mortal remains went on pilgrimage to various parts of the Amazon. The pilgrimage will end at Kuyuntza, where his remains will be buried among his people, the Achuar.

Fr Pascual Chávez wrote: "For Fr Bolla, the mission was the reason for being in his life. It seems to me, therefore, a wonderful initiative to return to his land, among his people in Kuyuntza, in the hope that his life, testimony, and spiritual heritage will be better known, appreciated and recognized by the whole community."