Kenya - Finally the rain, but much more is needed! 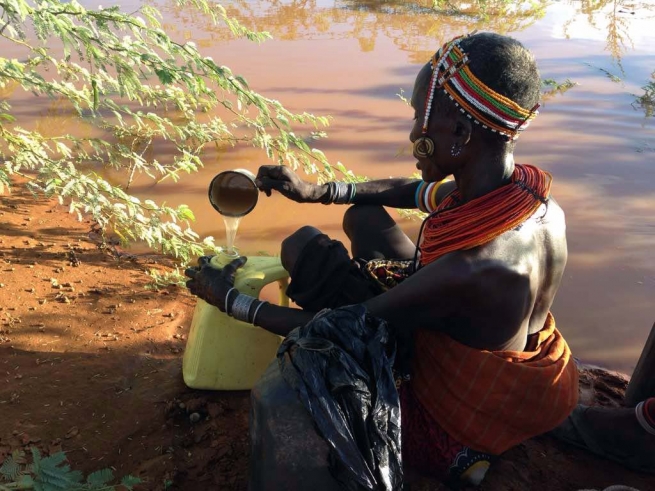 (ANS – Korr) – “Thank God it rained on the night of Sunday 30 April 2017. We have gathered some drinking water for we had almost none left. It did not rain heavily enough or long enough, but still we are happy and grateful”. This is the message from Fr Luke Mulayinkal, a Salesian missionary in the East African Province (AFE). Thanks to the support of the Don Bosco Network, Fr Luke is currently working to help thousands of families living in villages near the Salesian mission of Korr, in one of the areas of Kenya worst hit by the recent drought.

A lot of destruction happened along with the rain. Many cattle drank the water and dropped dead. They had been so badly famished that when they drank to the full they died. For many, their livestock was almost lost in the drought but with the rain more damage has been done. Still, the people are happy that it rained.

Small dams were built or dug in several areas which have water now. People and animals are now using that water. The number of people searching for water has decreased. “But imagine people drinking the first rain water which flowed through ground which had not got rain for over a year. The Sister at the Don Bosco Dispensary says that soon people will be coming with all types of stomach problems. You can only imagine,” adds Fr Mulayinkal.

“The rains only brought water but no food,” says Mr Godana, the Deputy Director of Caritas, Marsabit. “It has not rained enough. Pastoralists still need relief food and more rain. We hope it will rain again, at least once. And we pray for that”.

The second food distribution from the Salesians took place from 1st May to 4th May 2017. A total of 3,490 families were each given 5 kg maize, 2 kg beans and half a litre of oil. A total of 65 villages have received food in the second distribution.

“Don Bosco Mission–Korr works on a daily basis within a radius of about 60 km. The farthest villages we go to are Namarei, Lokichula and Lengima which are about 40 km from the Mission. Our works revolves also around Laisamis which is 72 km away, Marsabit which is about 150 km and Isiolo which is about 240 km away from the Mission. We do many trips around these areas but mostly in the 85 villages scattered around where we do the Relief Operation” the Salesian says. However, transport and communications were interrupted a lot since the rains.

So far, it has not been possible to reach some villages - Lengima, Lokichula and Namarei - because of flooded roads and limited access to aid resources. However, as soon as new funds are available, these villages will be reached and helped by the aid distribution operation. The Salesians, in fact, are integrating and correcting the list of recipients, and the goal is to support 4,805 families altogether.