Colombia – Fourth Continental Meeting on the Salesian School in America 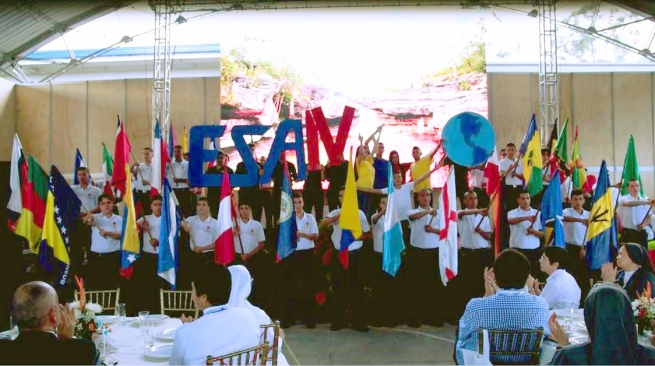 (ANS - Medellín) The Fourth Continental Meeting of the Salesian School in America (ESA IV) began yesterday, 9 May, at the "Villa de Sales" Congress Centre in Copacabana, Department of Antioquia, Colombia. This event brings together over 350 participants from 16 countries across the continent to draw up concrete operational lines around current educational needs.

In the afternoon, the material was handed to the participants who later took part in the opening ceremony during which the students of the Salesian school "El Sufragio" in Medellín staged a presentation that was able to bring together Colombian rhythms and theatrical performances, dancing and a flag parade.  Besides welcoming the participants, it also showed the evolution of education from the traditional to the use of new technologies.

The day ended with a moment of prayer in which the Sower was presented and the participants were invited to thank God for the Salesian school in America. At the same time, it was recalled that Don Bosco was able to infuse in the hearts of every young person a seed of hope and love and he made it grow and flourish.

This fourth ESA meeting advances the programme started in previous years at Cumbayá I and II and Brasilia 2008, where long-term operational lines were established, the results of which will be presented in the context of this event.

The meeting is taking place in the Province of St Louis Bertrand in Colombia-Medellín. It will continue until Friday 12 May, with a methodology that includes reports and interventions by experts, workshops and sharing of good practices developed at different schools in the Salesian Family on the American continent.