Mexico - On the 125th anniversary of Salesian presence, a visit that revitalizes Salesian life: that of the Rector Major 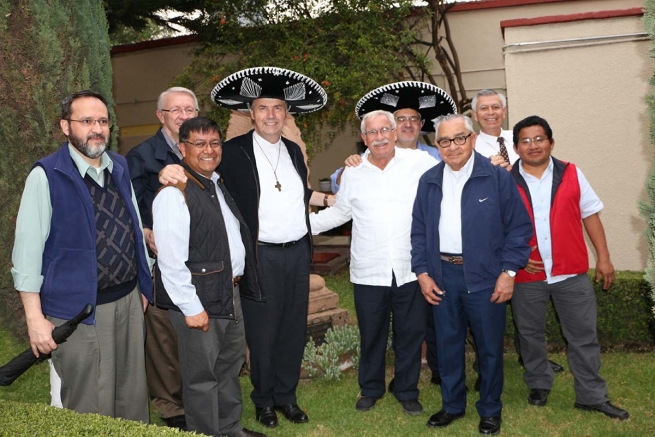 (ANS - Santa Julia) - To the joy of all Salesians and the Salesian Family in Mexico, the Rector Major, Fr Ángel Fernández Artime, Tenth Successor of Don Bosco, landed on Monday 8 May in Mexico City, accompanied by his Secretary, Fr Horacio López. The Salesian Provincial of Mexico City, Fr Gabino Hernández Paleta, and various Salesian Family representatives, welcomed him warmly.

Then, in a pleasant evening of fraternity, the Rector Major shared his experiences with all present while the community of the Provincial House welcomed him in the traditional dress of the "Charro Messicano”. Fr Á.F. Artime, visibly pleased, took part in a photo session and wore the typical Mexican sombrero, showing his pleasure at the gift.

On Tuesday 9 May, the Rector Major spent the day in fatherly contact with the Salesians, the Daughters of Mary Help of Christians, and lay people working in the Provincial House.

This year 2017 marks the 125th anniversary of the arrival of the first Salesians in Mexico on 2 December 1892 when they came, sent by Fr Michael Rua, the successor of Don Bosco.  They were Fr Angelo Piccono, Fr Raffaele Piperni, Fr Simone Visintainer, Cleric Augustine Osella and Brother Pietro Tagliaferri. They were welcomed by Fr Ángel Lascuráin. They had come in civilian clothes as it was forbidden in Mexico to wear the clerical attire. Thus began the Salesian adventure in Mexico, where "little politics and a lot of administration" defined a country with little social development and close to a revolution.

The Salesians came with the option of an active ministry which identified with poor people and especially with poor young people.

The Rector Major's Visit is taking place with gratitude and in the context of this history.  It marks a moment of gratitude, along with the Rector Major, for those who wrote the Salesian story in Mexico.