Mexico - Rector Major: "Today it's very important to bear witness by our lives if we are to be credible and convincing" 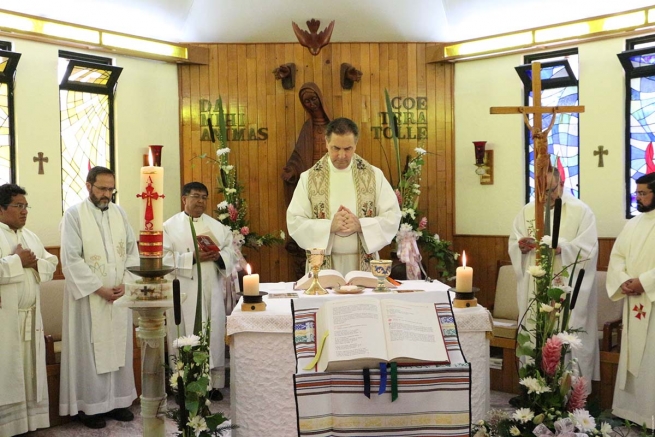 (ANS - Santa Julia) - The Rector Major, Fr Ángel Fernández Artime, is continuing his Visit to the Mexico-Mexico Province (MEM). In one of the first meetings with laypeople in the Province, he expressed his joy and said that "collaborating with lay people who take part in our works is very important. It is part of this beautiful reality of this province and I am also part of it."

The day began with a moment of prayer. After breakfast, the Rector Major met with the Provincial and his Council. He asked them how they were and how they were carrying out their mission. During the meeting, the Rector Major stressed the need to "share the mission and work side by side with the laity. We need to learn to delegate and to help lay people live the charism of Don Bosco." And he concluded: "Today it is very important to bear witness by our lives is we are to be credible and convincing."

The morning ended with the Eucharist in the chapel of the Provincial House, with the Rector Major wearing the stole that belonged to Don Bosco, now a relic in the MEM Province.

Then Fr Á.F. Artime shared lunch with the members of the Provincial Councils of the Salesians and Daughters of Mary Help of Christians, and some former Provincials.

In the afternoon, the Rector Major sent a video message to the Salesian Family of Southern Mexico, on the occasion of the 125th anniversary of the arrival of the Salesians in the country. In it he highlighted the relevance today of the charism and invited the Mexicans to continue to work in the service of young people and especially the most needy.

Fr Á.F. Artime was interviewed by Brother Jesús García, SDB, Editor of the Salesian Bulletin.  He asked the Rector Major for his vision of Salesian activity. The Rector Major emphasized in this regard "the importance of educating young people and evangelizing," and revealed that on his pilgrimage to the Shrine of Our Lady of Guadalupe - which he is making today, 11 May - he would ask the Virgin to help the Salesians to serve the most needy youth.