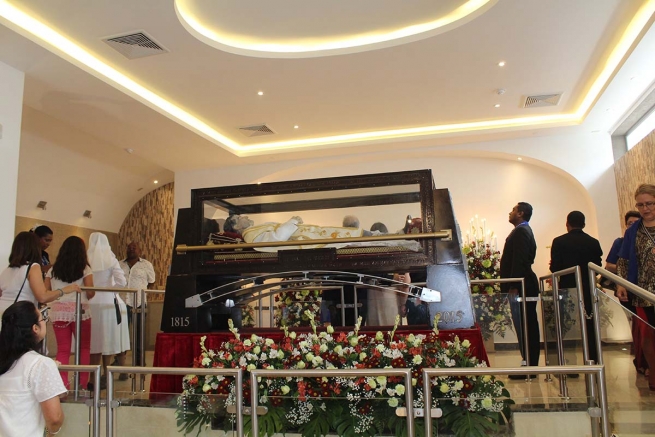 (ANS - Panama City) - According to Fr Miguel Giorgio SDB, Rector of the Basilica: "The Rector Major and his Council have sent a casket of Don Bosco to each of the five continents. The Salesian Provincial of Central America received the casket with Don Bosco's relic and decided to place it in Don Bosco Minor Basilica, considered the right place because of  the great devotion to Don Bosco in Panama. The casket came from Rome on 16 April 2016."

On 7 May, the chapel was inaugurated where it is now possible to venerate the relic of Don Bosco in the casket.

In view of the Bicentenary of the birth of Don Bosco, celebrated in 2015, a casket containing an important relic of the Saint of the Young was brought on pilgrimage around the world. Fr Oscar Rodríguez then asked the Rector Major, Fr Ángel Fernández Artime, if they could keep the casket for the Interamerica Region in Panama, precisely because of the great devotion to Don Bosco there.

While the chapel was being built, the casket was kept in a place of honour next to the main altar.  Finally, on Sunday 7 May, Good Shepherd Sunday, the casket with the relics of the saint was deposited in the special chapel, designed to put the casket on its own in the centre.

"The style is simple and well planned because nothing interferes with seeing the image of Don Bosco from the Cathedral itself, indeed the faithful can stand close to the casket and remain in prayer," explained architect Juan Carlos Campos, past pupil of the Salesian school of Don Bosco in Guatemala.

The Eucharist for the blessing the chapel was presided over by the Apostolic Nuncio in the country, Archbishop Andrés Carrascosa Coso, and concelebrated by several Salesian priests.

The Apostolic Nuncio said: "It is an honour that the Salesian Congregation has given us the casket with the relic of Don Bosco. This will be a pilgrimage site for many people. With great joy we bless this chapel, a place where one can touch and see the relic of the saint. This relic tells us that this man is not mythology, but was made of flesh and blood like us.  He followed Jesus Christ in such a way as to be an example, an intercessor and a blessing."