Mexico - The Rector Major at the feet of Our Lady of Guadalupe: "The education of children and young people under the care of the Help of Christians" 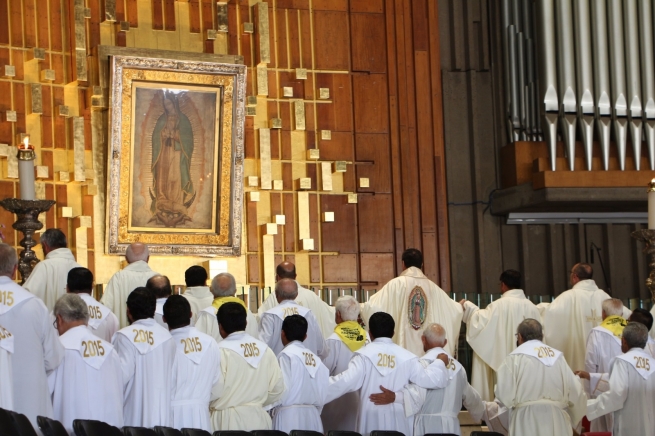 (ANS - Santa Julia) - The Rector Major, Fr Ángel Fernández Artime, led a pilgrimage to the Basilica in Guadalupe on Thursday 11 May and celebrated Mass at the feet of the "Morenita of Tepeyac", the Virgin of Guadalupe.

Accompanied by many members of the Salesian Family, along with teachers and students of various educational institutions, Fr Á.F. Artime, visiting Mexico for the first time, recalled that the formation of children and young people is the reason for the existence of Salesian centres. He invited all participants to feel touched and moved by the Virgin of Guadalupe, whom he called "Mary Help of Christians".

He called Tepeyac "the Consecrated Land of Mexico". His homily centred on four aspects of the Virgin Mary: as a woman; as a Mother; as a teacher, who teaches the way of holiness; and as a permanent helper of the human race.

On the first aspect, he said that women are a gift of God to all people, because they are signs of tenderness, sensitivity and care. He called for great respect for all women, and he complained that they are not always given their rightful place in society.

Speaking of Mary as mother, he referred to Jesus' words on the cross when he told Our Lady and the Apostle John: "Woman, here is your son"; "Here is your Mother" (Jn 19: 26-27), a gesture that implies that she is the mother of all humanity.

He also pointed out that the Virgin Mary is a great teacher, and he gave as an example the dialogues she had with Juan Diego in 1531. He explained that in Salesian formation there is constant concern about teaching young people the right way to live, to fight for peace and respect for human rights.

Finally, he said that the Virgin of Guadalupe is also a helper, as witnessed by the millions of pilgrims who yearly flock to this shrine to thank Our Lady for graces received.

The Eucharist celebrated at the feet of the Virgin of Guadalupe was offered for the needs of various Salesian houses in the world, in thanksgiving for the 125 years of Salesian presence in Mexico, and also for the people of Venezuela.