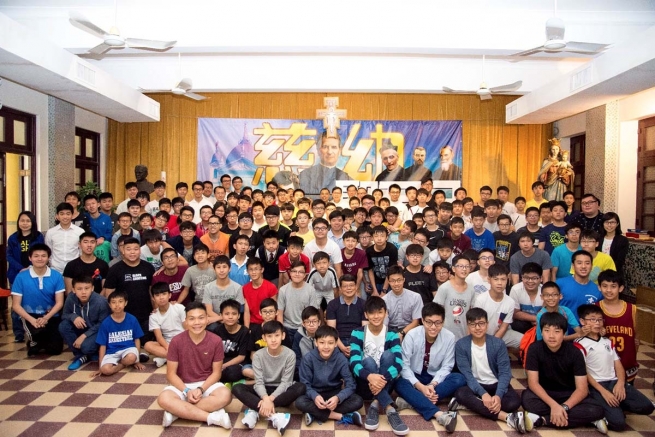 (ANS – Hong Kong) – The feast day of Saint Dominic Savio is the day which is taken by the China province as Vocation Day. It was a great joy in the Salesian House of Studies (Shaukiwan, Hong Kong) to see more than 100 enthusiastic young people from 7 Salesian schools in HK and Macao together with more than 10 SDBs to celebrate the joy of being a Salesian. This activity was preceded by a week of prayers for Salesian vocations and culminated in the celebration of Vocation Day.

The theme of the celebration is “to imitate the model of Dominic Savio and be a youth leader”. This theme is inspired by the story of the Sodality of the Immaculate Conception founded by St. Dominic Savio. After some ice-breaking games, a drama was performed by the boarders at Aberdeen Technical School. The drama highlighted the fight between two boys who had got into an argument and challenged each other to a rock duel. Dominic Savio learned about the fight and successfully caught up with the boys and tried to talk them out of it. Aside from the main feature of the drama on how Savio guided and ministered to the boys, there was also a sharing session for all participants to set up some rules to animate the sodalities in their schools nowadays.

The drama was concluded by a Vocation Film. Every year the Vocation Director invites an SDB to share his vocation story and produce a short film for Vocation promotion. This year Bro. Paul Li was invited to share his motivation for and reflection on being a Salesian Brother. During his sharing, Bro. Li asked all participants to consider their future to find out whether the Lord is calling them to dedicate their life to serving and guiding the youth.

To make the vocation celebration complete, there was a Holy Mass and a Football competition for the Savio Cup. In his homily, the Delegate for Youth Ministry, Fr. Antonio Leong, reminded all young people to imitate Dominic Savio. Furthermore, young people should be good company by giving good example to their peers. Finally, he said: “The voice of God may call you to be a Salesian brother or a priest for the salvation of the souls of young people.”