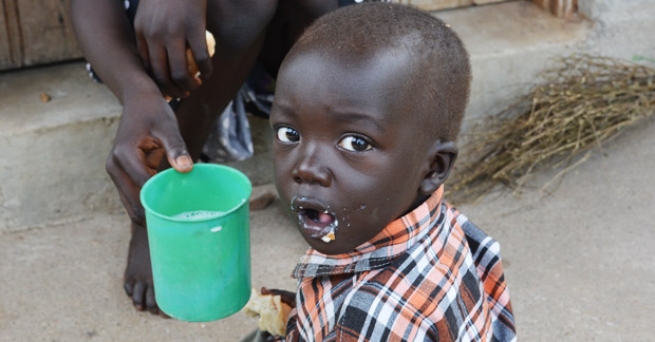 (ANS - Gumbo) - Conflict and famine in South Sudan are severely affecting minors. “In two days we weighed more than 300 children and we found that more than 200, between 3 and 6 years of age, are malnourished and of these, 170 are in a situation of a severe malnutrition”, as reported by the Salesian mission at Gumbo, near the Capital of the country, Giuba. “It was like a bad dream, we did not expect that the situation could be so serious”, they add.

The reality is that in the village more than one million children are malnourished, more than two million have left their homes and it is estimated that about 16,000 have been enlisted. These are data coming from international agencies.

The Salesians of the Salesian Mission of Gumbo have begun to give milk to children with malnutrition problems. The minors, being in a state of increased severity, in addition to the food, are also given some vitamin supplements. The lack of nutrition for thousands of children, involves a deficit growth and little attention to studies, among the various things. “We want to monitor them for two weeks, in order to see how they develop”- explain the Salesians-. But all this proves the very serious situation that people live in Gumbo, as they do not have the means to access the food, not even for the younger ones”.

The Salesians on site and the various Salesian Mission Offices, including the "Misiones Salesians", the Madrid Mission Office, are involved in supporting the South Sudan and in particular in order that “the international community will stop one of the today's greatest tragedies”.

"Lootings and killings continue to be in the village. At Gumbo the situation is quieter and we continue to carry out our activities: classes with children, activities with women, an agricultural project ... But in other places like at Wau and Tonj there were disorders and deaths in the past few days”. Finally, the Salesians conclude: “however the most curious thing is that, despite the situation, mothers and children ... are eager to learn and play ... they have so much life. Perhaps the world leaders will realize it and change their hearts”.