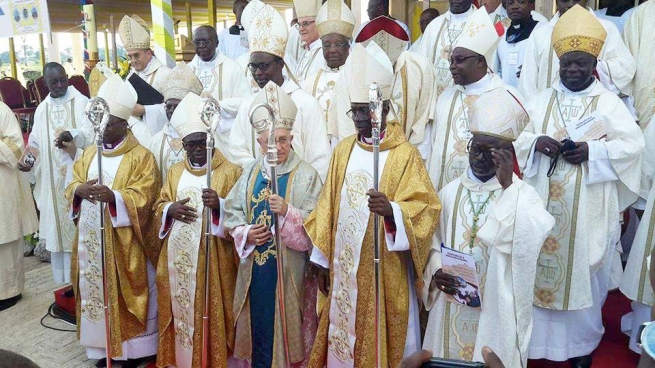 (ANS – Mongomo) – May 20th, 2017, will be remembered as a fundamental stage for the history of the Church in Equatorial Guinea: in fact, in Mongomo, Cardinal Fernando Filoni, Prefect of the Congregation for the Evangelization of Peoples, presided over the solemn Eucharistic concelebration for the ordination of three bishops and the inauguration of two new dioceses. Among the ordained prelates there is also Salesian confrère Miguel Angel Nguema Bee, SDB, who yesterday, May 24th, on the occasion of the feast of Mary Help of Christians, took possession of his dioceses, Ebebiyin.

The new face of the Church in Equatorial Guinea is the fruit of “a missionary work that was commenced in the past by many courageous evangelizers who spent their lives for the Gospel and for the poor” and aims “at a further and adequate development of the Church in this country”, Card. Filoni pointed out in the homily he delivered for the Mass of the episcopal ordination, that was concelebrated also by several bishops of neighbouring countries and by the Apostolic Nuncio to the African country, in the presence of the President of the Republic and of numerous authorities.

The Cardinal then exhorted the three candidates to the episcopate to be “brave men and authentic witnesses of faith”; and invited all those present to love their bishops and priests, “not because they are perfect, but because the Lord has called them to your service”.

The Prefect of the Missionary Dicastery could in a more specific way devote his time to Msgr. Nguema Bee and to the faithful entrusted to him during the installation Mass that was celebrated yesterday in Ebebiyin.

“Msgr. Miguel begins his ministry in the diocese that exists since 35 years – he said in his homily – but with the creation of the new diocese of Mongomo it will have a smaller territory and a smaller number of priests. This will give the new Pastor more time for your needs. But it also implies the necessity of a grater collaboration from you”.

Then, drawing inspiration from the liturgy of the day, he invited the faithful not to be discouraged when the results of their work seem to delay; he rather insisted “to always proceed with generosity in the work of evangelization, in proclaiming the Word of God, in helping the poor and the needy, and (…) in going to the places that are most difficult and marginalized”.

He then concluded entrusting to Mary the Church of Ebebiyin and the beginning of the episcopal ministry of the new bishop, Msgr. Nguema Bee, SDB.