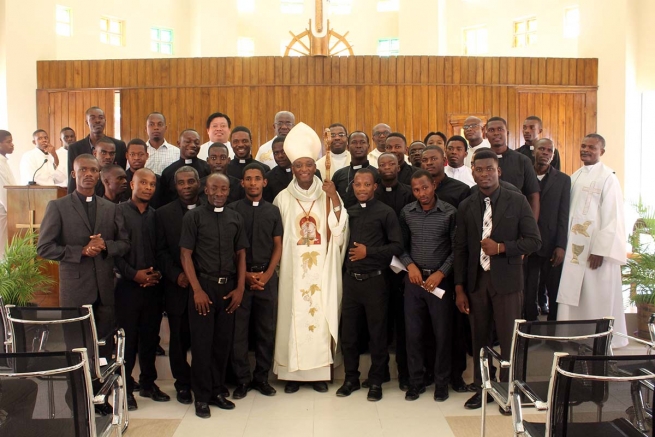 (ANS – Port-au-Prince) – The Feast of Mary Help of Christians this year 2017 was celebrated in a very special way by the Salesians in Haiti, thanks to the presence of Cardinal Chibly Langlois, Bishop of Les Cayes, who presided over the Eucharist at the “Saint François de Sales” Institute of Philosophy in Port-au-Prince. This also offered the opportunity to celebrate two great events concerning the Institute: its recognition by the Haitian government and its affiliation to the Salesian Pontifical University (UPS) in Rome.

During the homily at Mass, the Cardinal encouraged the Salesians to continue with the formation of the youth. “The reason for your joy and your gratitude today is twofold. The recognition of the Institute by the Ministry of National Education of Haiti and by the Salesian Pontifical University in Rome opens up new opportunities for the students that attend it”.

At present the Salesian Institute is attended by seminarians of more than 15 religious communities.

Later on the Cardinal, who is also the President of the Haitian Bishops’ Conference, mentioned the role that this Institute of Philosophy plays for the Church of Haiti: “If I am here with you today, it is not only in a private capacity, but in the name of the entire Church of Haiti, which sees in the Institute of Philosophy of the Salesians a gift of the Lord to the Church of Haiti for the formation of the future pastors who are called to guide the people of God in the name of the One Shepherd, Jesus Christ”.

The approval of the request of association of the “Institut de Philosophie ‘Saint François de Sales’” from the Salesian Pontifical University (UPS) was given subsequent to the favourable opinion of the Teaching Staff and the unanimous consent of the Council of the Faculty of Philosophy of UPS.