Slovakia - Towards the beatification of the martyr don Titus Zeman, SDB 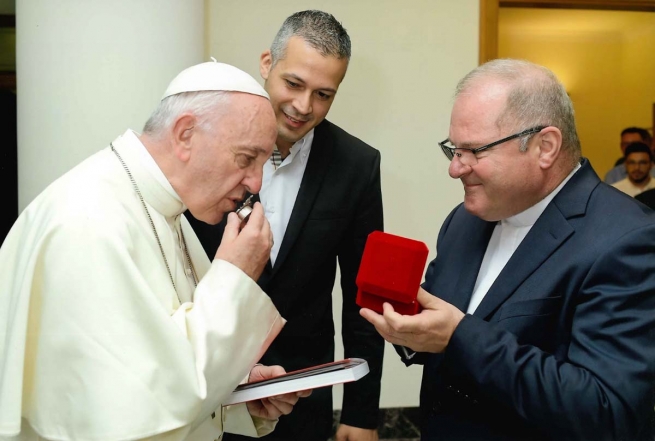 (ANS - Bratislava) - In view of the beatification of Fr. Titus Zeman, Salesian Martyr for the Salvation of Vocations - scheduled in Bratislava on 30 September 2017 - the Salesians of Slovakia, led by the Inspector Fr Jozef Ižold, and the Archdiocese of Bratislava , guided by the city's archbishop, Msgr. Stanislav Zvolenský, have initiated a synergistic collaboration in three areas: the prayers, the knowledge of Don Zeman and his charisma, and the organizational, liturgical and technical preparations.

The prayer of the Novena for Beatification was replaced by a Novena to ask for the grace of a miracle for his Canonization. Many also invoked the intercession of the martyr in prayers for new vocations and for their perseverance.

Meanwhile, the knowledge of Don Zeman's personality and charisma is increasing, thanks to meetings, conferences, catechesis, programs broadcast by radio and TV, a documentary about his life, as well as the web page: www.tituszeman.sk (in Slovak, Italian, English and Spanish): all tools that are useful in expanding the example of the new patron of priestly and religious vocations, vocations to matrimonial life and the formation of Christian families.

Not less important is the preparation of the liturgy and the logistics necessary to accommodate the thousands of devotees expected to attend the event, beginning from the wake of the previous day to the Eucharist of the Beatification, and the giving of thanks on the following day.

The visit of Fr Jozef Slivoň, deputy vice-postulator of the Cause of Beatification and Canonization of Don Titus, took place in the Vatican where he co-celebrated Mass with Pope Francis at the "Santa Marta" building. After Mass, Fr Jozef gave the Holy Father a small relic of the martyr, and a new biography of Don Zeman entitled "Beyond the River to Salvation", by Lodovica Maria Zanet, an Italian translation of the biography, "Titus Zeman SDB mučeník pre záchranu povolaní", or Titus Zeman SDB, martyr for the salvation of vocations, by Michal Titus Radošinský.

The Holy Father, joyfully accepting the books, revered the relic and sent his blessing. In conclusion, the vice-postulator promised the Pope that Don Zeman's devotees, after the Beatification, would organize a pilgrimage to Rome, to thank the Lord for the new martyr.