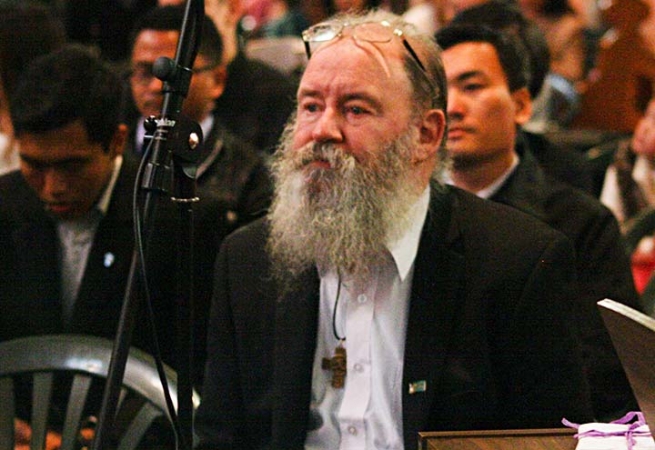 (ANS – Melbourne) – In 2010 I had a sabbatical year in New Mexico (USA), a place called Sangre De Cristo. Fr Michael Crosby, OFM Capuchin, was one of the speakers. He struck deeply in my heart: "We need to do justice; not just talk about it!" That made me think, so when I got back to Australia I thought I should perhaps contact a group working with refugees. Sr Tania De Jong (a Sister of the Good Shepherd), also on the Sangre De Cristo sabbatical program, told me about ACRATH (Australian Catholic Religious Against the Trafficking of Humans). I was invited, and so began my apostolate.

ACRATH was started in 2005 as a direct result of CRA (Catholic Religious Australia) and the awareness of the problem of Human Trafficking. The Sisters of the Good Shepherd, St. Brigide Sisters, Franciscan Sisters of the Divine Motherhood, Presentation Sisters, Sister of Charity, Sisters of the Good Samaritan, Sisters of Mercy and Sisters of St Joseph were pioneers dealing with this issue. Later, lay people and others, including a Christian Brother and one Salesian of Don Bosco, became involved.

With ACRATH, we are involved in actions on behalf of Human Traficking by:

Work started in Sydney and Melbourne, and has expanded nationwide since 2005. The group continues to work in every way possible, collaborating with State police, Australian federal police, lawyers, judges.

ACRATH's strength consists in empowering the particular gifts and skills of its members. We offer support to each other and encourage each to claim personal giftedness. None of us has all the knowledge or abilities necessary to eradicate trafficking in Australia and regions. We are convinced that if we continue to review and evaluate our work, and to continually welcome new women and men into the network, we will become an ever greater force in the Australia-Asia-Pacific region in relation this task. We shall, indeed, be the heart, voice, hands and feet of Jesus who desires the fullness of life for all and, especially, for those who are marginalized and most vulnerable.

So it was that in 2011, after I got home from USA, I began my work with ACRATH. The first project I became involved in was the area of Fairtrade chocolates (cocoa not harvested by child labor) in local parishes at Easter time. I then became involved in the Local Ethnic Radio mission.

In 2013, ACRATH launched Australia’s first multi-language anti-trafficking radio awareness project, a bid to create awareness about the risk of sexual and labour exploitation in Victoria State (Australia). Radio Project works with local ethnic radio programs to broadcast community service announcements, in specific languages, to create awareness within local communities most at risk of exploitation. With the help of local volunteers, RAP has produced community service announcements in Thai, Vietnamese and Chinese (Mandarin). In 2017, we have broadened it to include more languages and to incorporate the issue of forced marriages.

In 2015, I put together a book "One in a thousand stories: a tale of human trafficking." I called it a picture book for grownups. The pictures are in needlepoint - a skill we learned in Sangra De Cristo. Its story: two women from Thailand - or a similar country, such as Indonesia, Vietnam, etc. - who were trafficked to Melbourne, Australia. Though a work of fiction, it is based on facts, and the book itself was presented on 5 February 2015 during ACRATH's General Assembly by the AUL Provincial, Fr. Greg Chambers.

In the future, I hope to continue to participate in these activities, including radio. I also hope to talk to young Salesians, especially those coming from those countries where people are being trafficked, so as to let them know what are the ways they may be able to help and find help.