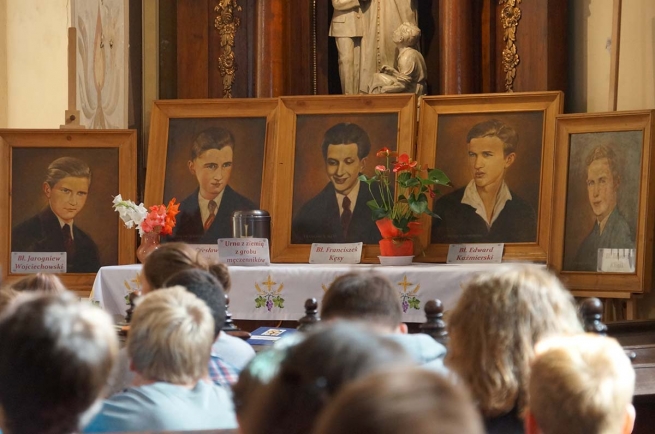 (ANS - Rome) - On the occasion of the 75th anniversary of the martyrdom of the five young oratorians of Poznań - which took place in Dresden on 24 August 1942 - and as we approach the 18th anniversary of their beatification - celebrated by Pope John Paul II in Warsaw on 13 June 1999 - the Rector Major, Fr Ángel Fernández Artime, travels to Poznań to commemorate the martyrs and their testimony.

The visit takes place during one of the traditional weekend breaks from the work of the General Council, which is why the visit is so brief. The Rector Major, accompanied by his secretary, Fr Horacio López, departs this afternoon, Friday 9 May, and will arrive in Poland this evening.

Saturday, June 10, will be the central day of the trip: Fr Á.F. Artime will meet the families of the 5 young martyrs, speak and pray with them. Then he will visit a related exhibition and celebrate the Eucharist. In the afternoon, there will be a second cultural event, with a youth concert, and a visit to "Fortress VII", the fearsome jail where the 5 martyrs were initially detained.

On Sunday morning, before leaving for Rome, the X Successor of Don Bosco will still have time to animate the local young people, including a short procession with them to the church of the martyrs, and then to Mass, which will be presided by the Regional Councilor for Central and Eastern Europe, Fr. Tadeusz Rozmus.


Ceslao Jóżwiak, Edoardo Kaźmierski, Francesco Kęsy, Edoardo Klinik and Iarognievo Wojciechowski are the names of the five young people who in the 1930s committed themselves as valid animators in the Salesian oratory of Poznań. Following the German invasion of Poland, they were arrested in September 1940, tortured, and guillotined after being found guilty of high treason in a fake show trial. Even during their captivity, they continued to live in a spirit of faith and Salesian spirituality, and the letters they wrote immediately before their execution are evidence of how they went to their deaths with great faith.