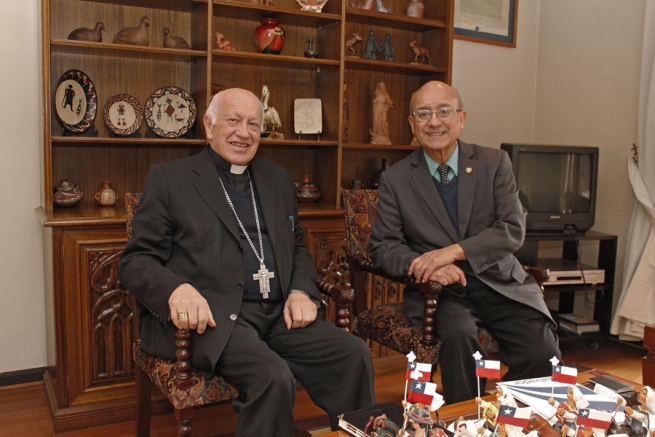 (ANS - San Salvador) - Pope Francis has appointed his Special Envoy to represent him at the commemoration of the centenary of the birth of Blessed Bishop Óscar Romero: Salesian Cardinal Ricardo Ezzati Andrello, the Archbishop of Santiago de Chile.

During the great celebration for the announcement of Pope Francis's visit to Chile and Peru in January 2018, the additional news was Cardinal Ezzati's representing the Holy Father at the celebrations for the Blessed Mgr. Romero.

Bishop Óscar Arnulfo Romero was born in Ciudad Barrios, El Salvador, on August 15, 1917; he was nominated archbishop of San Salvador by Pope Paul VI in 1977. His pastoral action emphasized the defense of human rights; on 24 March, 1980, Msgr. Romero was killed in hatred of his faith. On 3 February, 2015, Pope Francis acknowledged his martyrdom, and he was beatified on 25 May by Cardinal Angelo Amato, SDB, Prefect of the Congregation for the Causes of Saints, in San Salvador.

Promoted by the Salvadoran Catholic Church, the centennial celebration of his birth is scheduled for August 15th. On 8 June, Cardinal Ezzati and the Ambassador of El Salvador in Chile, Víctor Manuel Valle, a former Salesian student, met to coordinate common actions.

Cardinal Ezzati declared: "We welcome this request with great joy and great hope as the figure of Msgr. Romero is no doubt a prominent figure for El Salvador, throughout Latin America and for the Catholic Church around the world. The beatification of Msgr. Romero is an ecclesial event. People already call him San Romero of America, for the significance of his life and his actions in favor of his people. He was indeed a peace activist, a martyr of the Church; his death moved the world, a testimony of his courage in delivering his life."

For the Salvadoran Catholic Church, the news exemplifies the Pope's continued attention and interest towards El Salvador and the blessed Bishop Óscar Romero.