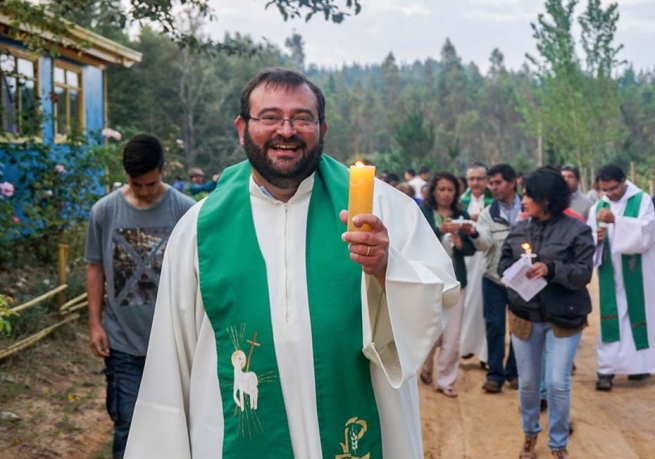 (ANS - Rome) - With the consent of the General Council, the Rector Major of the Salesians, Fr Ángel Fernández Artime, appointed Fr Carlo Andrés Lira Airola as Provincial of the "San Gabriele Arcangelo" Province of Chile, who will begin this new assignment on 27 January, 2018.

Fr Lira was born in Valparaiso on 15 January, 1969. He learned of the Congregation at the Salesian Institute in Valparaiso, where he studied for several years and where he "fell in love with the Don Bosco Project".

His novitiate took place in Macul, Santiago, Chile, in 1991, with his first profession in 1992. In 1997, he pronounced perpetual profession as Salesian of Don Bosco. He then started his theological studies at the community of La Florida in Santiago de Chile, and was ordained priest on August 14, 1999.

Shortly after he became acquainted with the appointment, he shared his first impressions: "I am very happy for the confidence my confreres have shown in the consultation, and for the confidence the Superiors have placed in me by asking me to take on this service. I'm excited about the Lord's call to offer my life to His service in favor of young people."

"I hope I can help and serve my confreres in the Province, animate the presidents and lay brothers who are also engaged in this mission, and to be able to tell young people that we are waiting for them to serve them as they deserve, to help them grow in humanity, in faith and to offer them the best."

Finally, he added: "We will give what we have and what we are, in all honesty and passion - that is something that characterizes me - together with the joy and the desire to do things wholeheartedly."