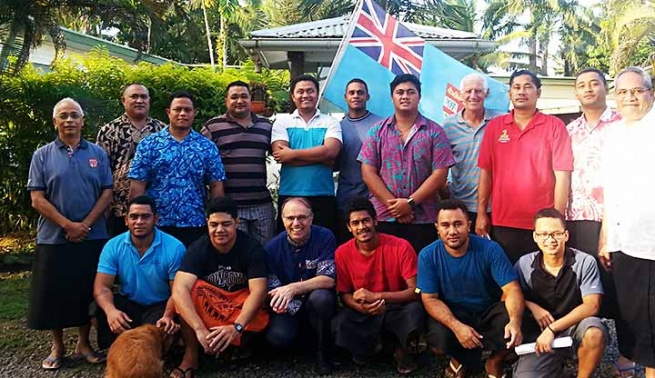 (ANS – Suva) – Five months after the birth of the Pacific Delegation, the dynamic community of Suva Don Bosco becomes the most visible expression of the new frontiers. Six novices, five postnovices, one deacon and four formators are forming the largest Pacific community of AUL province, under the leadership of a new rector Fr. Tevaga Paselio.

After two years of hard work and prayers we finally got the land title of the future Don Bosco Parish in Suva (official start planned in August 2017) with the first parish priest Fr. Mika Leilua. Although the clearing and leveling of the new property is still to be started, the parish Mass is already celebrated in one of the humble chapels of the new parish like the Pinardi shed at Valdocco.

A new rector, a new novice-master and six novices are accompanied by the six clerics in initial formation (5 postnovices and one deacon). The inter-cultural touch of Suva community adds the dynamic to the Delegation - five nationalities: Australia, Fiji, Myanmar, Samoa and Vietnam among sixteen members!

Family spirit among the confreres, deep involvement in the local church (inter-congregational novice weekly meeting), outreach to the poor youth in Suva, ecumenical slant (friends with other Christian churches) are the main characteristics of this community.

With the birth of the new Delegation, the Suva community feels more responsibility for the quality formation, initial and ongoing, of the young confreres, including the formation of the first Salesian Cooperators Aspirants, and is ready to share more about its life and newly developing mission: building up the new parish community and future youth center.