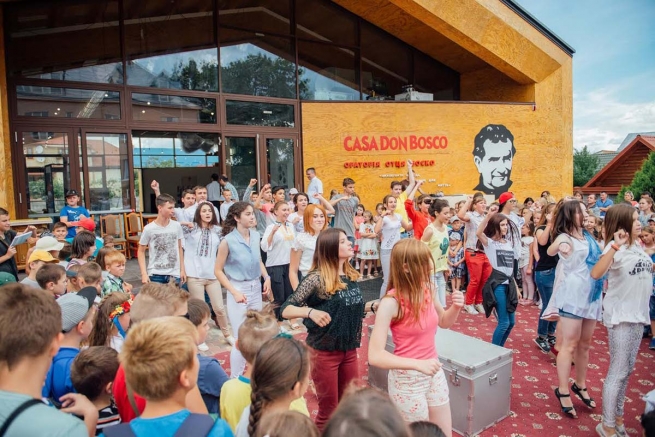 (ANS - Vynnyky) - Casa Don Bosco comes to life again in Ukraine: two years after the end of the Milan Expo, the pavilion that hosted many young visitors to the universal exhibition is now in Vynnyky, a town on the outskirts of Lviv.

At the inauguration on Sunday, July 2, there was the City Mayor, Volodymyr Kvurt, the Salesian Provincial of Ukraine's Special District, Fr Karol Maník, the Delegate of the Rector Major of the Salesians for Expo Milano 2015, Fr Claudio Belfiore, many Salesians and children, teenagers and families, all gathered to express their thanks for this precious gift to the young and to the city. The Eucharistic celebration, in the Byzantine rite, was followed by games for the young, and continued into the evening with a party of the young, much to the satisfaction of their families, the city authorities and the Salesian community.

Community which, in order to fully exploit the structure and offer more opportunities for young people, has already begun setting up two sports grounds and has laid the foundations for the construction of new adjacent Casa Don Bosco building, some to be used as changing rooms with showers and others destined for use as classrooms for vocational training.

The idea of ​​carrying Casa Don Bosco from Expo to Vynnyky was on indication of Dr. Ercole Lucchini, financier and executive director of the project who in July 2014 expressed this wish: "I have received so much from Don Bosco and on this occasion, in the year of the celebration of the Bicentenary of his Birth (2015), his presence at Expo could not be missing. As Salesian Past Student I wanted and supported this project to say thanks to Don Bosco, and because the world today needs education and young people if its wants to have energy for life."

Visitors who passed through Casa Don Bosco at Expo were welcomed by the young who repeated that the pavilion was at the fair temporarily, for only 6 months, waiting to go to Ukraine to be what it was designed to be: a meeting and training place for young people.

"Seeing Casa Don Bosco standing again, surrounded by young people and children was highly emotional, like being born again! When the decision to build the pavilion was taken we were in the world of dreams ... and here in Vynnyky what we all dreamed about has come true," Fr Belfiore commented.