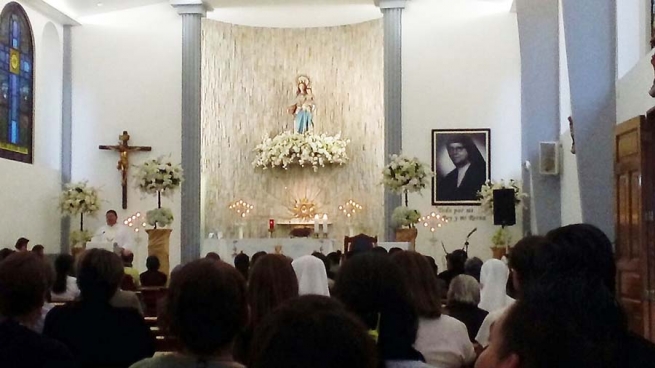 (ANS - San José) - "Saints are not supermen; they are not born perfect. When they met the love of God, they followed Him, at the service of others," Pope Francis once explained. This message adapts well to the figure of the blessed Sr Maria Romero, a religious of the Daughters of Mary Help of Christians (FMA) who dedicated herself to serving the poor in Costa Rica for 46 years serving in medical clinics, and in youth boarding houses with the Association of Aid to the Needy made up of families who previously lived in inhumane conditions. Forty years since her death, her life still acts as a valid testimony.

In various ways, Costa Rica's FMA celebrated the anniversary of her death, 7 July 1977, when she went to her Father's house with "her King and Queen," as she used to call Jesus and Maria.

The celebrations, in fact, began a week before the anniversary with a procession at San José's "La Merced" Parish, and commemorated the filial love the religious had for the Church, praying for peace in Costa Rica and Nicaragua, for migrants and refugees, the poor and displaced.

In the following days, a symposium was held: "The Salesian Charism in the Blessed Mary Romero." A figure emerged – out of silence, prayer, obedience, and sacrifice – who gave her best to the Lord's chosen, the poor and those who distinguished themselves for their unshakable faith in Divine Providence, which still accompanies her works even today.

Then on July 7, a number of Masses took place throughout the day, and blessings were offered to the sick, and relics of the Blessed were on exhibit.

Since the FMA's arrival in the country in 1917, hundreds of religious have donated their lives to God in the service of children and young people in the style of Sr Romero, who has been included, together with St. John Bosco, among the patrons of the World Youth Day in Panama 2019.