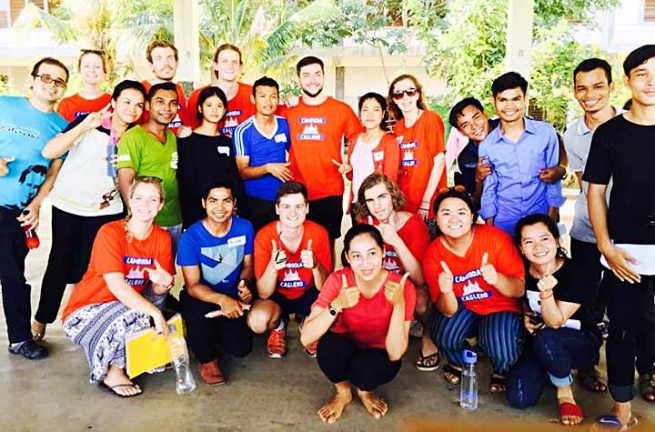 (ANS – Phnom Penh) – The Cagliero Immersion Project, started in 2009, offers students and young people from Australian Salesian houses an opportunity to experience life in another country and to learn about another culture. This year, the group of young participants headed to Cambodia for the immersion and arrived on 1 July, 2017, in Don Bosco Technical School, Phnom Penh, Cambodia's capital city. The team consisted of twelve Cagliero immersionists accompanied by Fr. Bernie Graham, Cl. Tristan and Ms. Romina.

The Immersion Team was officially welcomed by Fr. Roel Soto, the Community Rector, during the Community Mass on Saturday evening. The group had two days of community work, working alongside the Khmer students of DBTS during which they cleared the canals and constructed new covers for the canals around the soccer field.

Australian participants spent three nights in the houses of the teachers as an immersion experience to know what it is to live in a Khmer family. Moreover, they learned about Cambodian culture, life and history. Cambodia has a recent history marked by tragedy and genocide from which the country is only slowly emerging, so a visit to the ‘Killing Fields’ Genocide Center and the associated Prison Museum offered real insight into the experience of most Cambodian families who lost members during the period of the Khmer Rouge's rule (1975 – 1978). Finally, the students had the opportunity to visit parts of the ‘new’ Phnom Penh, a demonstration of the resilience, determination and courage of the current people as they rebuild their lives, city and country.

The Cagliero immersion team was also tasked by Fr Charles Arun, Delegate for Cambodia's Youth Ministry, to organize a camp for approximately 60 young animators from the various Salesian Centers in Cambodia, including a group from the Salesian Sisters center, on July 7-9.

The camp highlighted five qualities necessary for a Salesian youth animator: Joy, Gratefulness, Hope, Love and Friendship. At the end, the Cagliero immersion group, along with the Salesian youth animators attending the camp, animated the students of Don Bosco Technical School, Phnom Penh, on July 9. The entire day was filled with activities like Dancing, Art and Crafts, Beads- and Bracelet-making, Indoor and Outdoor Games and Role Playing for all of the 500 students on a rotating basis. The day concluded with an exciting basketball game between the Australian Immersion participants and Don Bosco Tech students.

“The Australian youngsters bring a lot of joy and inspiration to the Cambodian Salesian school, and in turn they also return home with a heart full of joyous memories of serving others and getting to know the beautiful cultures of Cambodia and its young people” the Salesians commented.