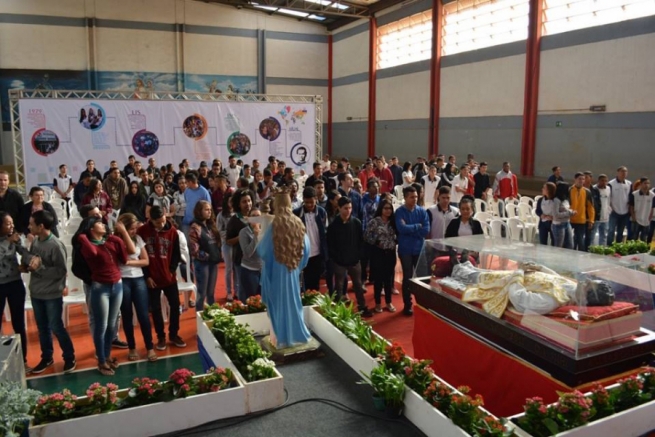 (ANS - Brasilia) - In 2009, the relics of the Saint of the Young began their peregrination across the globe. For five years, they were brought to the many places Salesians work at the service of young people who are poor and needy. In 2015, to celebrate the the 200th anniversary of Don Bosco's birth, the Rector Major, Fr Ángel Fernández Artime, decided that five relics would be placed in five important Salesian locations in the world, and one of the chosen locations was: Brasilia.

On August 16th, indeed, Brazil's Salesian Family shall have an additional reason to celebrate the birthday of its founder: the arrival of the Don Bosco's relics to the country's capital, Brasilia, where the relics will be on permanent display and on view to the faithful for veneration.

Arriving in the capital of Brazil as a gift from the Rector Major: an urn containing a full-sized statue of Don Bosco; inside, a relic of the right arm from which Don Bosco raised his hand in blessing. The urn itself is a replica of the urn which in Turin houses the other mortal remains of Don Bosco, and is similar to the other urns destined to the other four sites designated by the Rector Major: Cherrapunjee, India; Panama City, Panama; Macao, China; and Nairobi, Kenya.

The choice of the city of Brasilia is not by chance, but has to do with the famous dream in which Don Bosco dreamed of the city of Brasilia long before it was founded and built. It was August 1883: Don Bosco said he had dreamed of a great plain between the 15th and 20th parallel of the world's southern hemisphere, and on that plain he had seen a lake, and there would be a large development. Where there was a desert at the time, Don Bosco prophesied spaces for culture, growth, a place that would become the country's capital wherein Don Bosco shall always be much loved and revered.

Various activities are planned to celebrate this forthcoming great event. The culimination of the celebrations will take place on Sunday, 27 August, with the arrival of the relics at their permanent home, the Don Bosco Temple in Brasilia; there will be a procession in honor of the Saint, and the blessing and inauguration of a crypt for the urn inside the great sanctuary dedicated to Don Bosco.