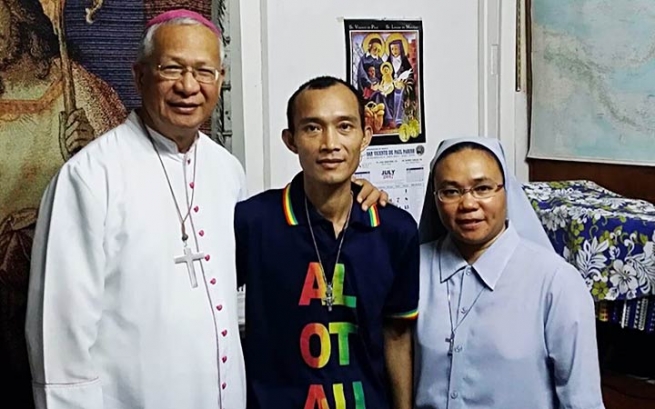 (ANS – Alotau) – The story of the 130 Vietnamese fishermen arrested for illegal fishing and harvesting beche-de-mer in the waters of Milne Bay, Papua New Guinea, has happily ended. Thanks to the commitment of many people, and to the decisive efforts of Sr. Ma Theresa Trinh Vu Phuong, Daughter of Mary Help of Christians, everyone was able to return home.

Captain Dinh Van Tam was the last of the Vietnamese fishermen detained at Giligili prison in Milne Bay Province. He suffered from deep depression, became very weak and was put on oxygen at the Alotau General Hospital. “We thought that this Vietnamese captain would die. At that time, Sr. Ma Theresa Trinh Vu Phuong, FMA, a Salesian sister who had been helping the Vietnamese fishermen, was in the Philippines. Fortunately, she returned to Alotau on time to help the Vietnamese boat captain. She served not only as interpreter but also as caregiver. She also prepared food for Tam and even fed him,” said Bp. Rolando Santos CM, Bishop of Alotau-Sidea.

With the help of a medical doctor, Sr. Trinh was able to convince those in charge of prisons and Immigration to allow Tam to return home to Vietnam before something worse happened to him. Senior Immigration Officer, Pauline Mitil Solomon, gave her support. The prison authorities were also very kind. While in the hospital, Tam was given a prisoner companion to take care of his needs.

After some difficult negotiations with Immigration in Port Moresby and much prayer, Sr. Trinh was finally able to get the go signal for Tam to leave for Vietnam. He could already fly to Moresby and from there to Manila and finally, Vietnam. Sr. Trinh and Fr. Francis Raco PIME brought Tam to Bp. Rolando Santos, CM, Bishop of Alotau-Sideia, who blessed him and gave him a Miraculous Medal of Our Lady to protect him. Tam was so happy and said that the first thing he would do when he returned to Vietnam was to have himself baptized in a Catholic Church.

On Friday, 28th July, Captain Tam was finally able to fly to Vietnam and be reunited with his family who had been anxiously waiting for him.

Over 130 Vietnamese fishermen were detained in the prisons of Alotau, Giligili and Bomana in Papua New Guinea for illegally fishing and harvesting berche-de-mere in the Milne Bay Province.

“Charity is not easy, but with trust in Divine Providence and the help of Our Blessed Lady, nothing is impossible. Joy, happiness and thanksgiving are at the end of the journey for those who persist, who trust, and love with the strength of their arms and the sweat of their brow. The story of these 130 fishermen has been a difficult one, but they are grateful to be back to their homeland.”

“Sr. Trinh has once again been the role model for us, of the strength and the love we should have for those who are weak and helpless. With the grace of God, the mission of repatriating the last of the Vietnamese fishermen has been completed,” concluded a deeply grateful Bp. Rolando Santos.