Hungary - An important moment of cordiality and communion: Team Visit 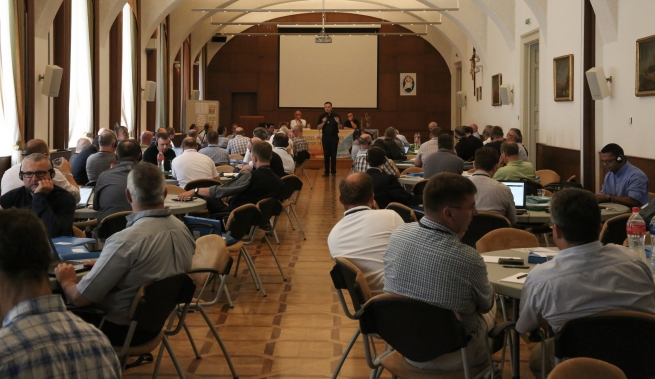 (ANS - Esztergom) - After Monday's introduction and preliminaries, the work of the Team Visit to the East Sector of the North Central Europe Region intensified yesterday, Tuesday, 8 August. The protagonists of the first day were the Rector Major, his Vicar, the Regional Councilor and the Provincial of Hungary.

After prayers of praise and meditation, the Rector Major, Fr Ángel Fernández Artime, SDB, presided over the Eucharistic celebration, in which Fr Francesco Cereda, his Vicar, delivered the homily.

At the beginning of the sessions, the Hungarian Provincial, Fr. Béla Ábrahám, greeted all participants with a fraternal welcome. He spoke of the figure of Saint Adalbert, patron of the center where the Visit is taking place, and expressed his satisfaction in seeing so many Salesians gathered together in Hungary as it had not happened since the beatification of the martyr Stephen Sándor, Salesian Coadjutor. "This experience gives us great courage and renews the hope that the Salesians in Hungary will, sooner or later, be as numerous as they are today in this room," said the Provincial.

Subsequently, the Rector Major mentioned that the current Team Visit was already the seventh, and that it represented an important moment of fraternal cordiality and communion. He also remarked that the Pope strongly encouraged the Salesians to participate intensively in the Synod on Youth and he added that during one of their most recent meetings, the Pope, quite moved, said, "speak of me to the Madonna."

The Regional Councilor, Fr. Tadeusz Rozmus, then presented his report on the state of the region. This was followed by a discussion by the representatives of the various Provinces who addressed the issues of the Congregation and the state of affairs in the East Sector of the Region.

In the afternoon, the Rector Major's Vicar, Fr Cereda, presented his report on the redesign of the Salesian Presences in the Provinces after which there were group talks and discussions and time for debate during and for the assembly.

At the end of the day, the Rector Major offered a summary of the work done, including the reports that emerged and were shared, and spoke too of some topical issues, both global and local.

On ANSFlickr there are numerous photos.