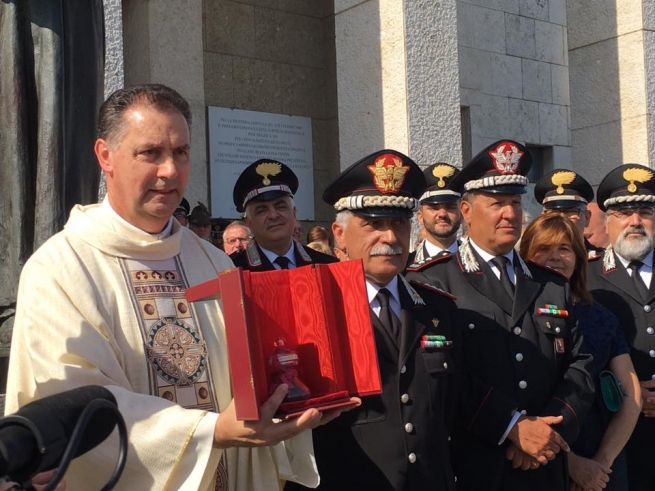 (ANS - Castelnuovo Don Bosco) – Recharging oneself of Don Bosco's spirit and transmitting it to one's peers, what over 250 young people of the Salesian Youth Movement (SYM) of Europe and the Middle East have done this summer during the "Confronto Salesian Youth Movement 2017."  Today, on the 202nd birthday of the Saint of the Young, the meeting's concluding events and relocation of Don Bosco's relic are scheduled at the Basilica of Colle Don Bosco.

Since Sunday 13 August, Fr Ángel Fernández Artime, Rector Major, has been accompanying the youths of the Confronto on their visit to the Don Bosco sites in Turin. The following day, Monday, Mother Yvonne Reungoat, Superior General of the Daughters of Mary Help of Christians (FMA), who accompanied the young people to the sites of Mother Mazzarello, joined him.

Yesterday, August 15, the 250 SYM animators went for a hike in the style of Don Bosco and, in the afternoon, held talks with Fr Á.F. Artime and Mother Reungoat. The young Salesians  were invited to cooperate more actively in the Salesian mission, engage with the consecrated religious, seek and evangelize young people who are the most needy and distant. Finally, a wake of Eucharistic worship began in the evening, and lasted all night.

On the morning of the Confronto's last day, today, August 16, the leaders of "Small Team SYM Europe", the European SYM's coordinating team, produced a document summarizing the commitment of the young Salesian animators for the future:

"We are convinced that God has summoned each of us to this Confronto 2017 of SYM Europe and the Middle East.

Coming from different cultures, we have here experienced the spirit of family, joy, prayer and reflection.

From this Confronto Meeting, we feel that we are sent as the protagonists of Don Bosco's vision, passion and mission to live our life project in today's world.

We strive to reach out to other young people, especially the most needy ones.

We are not afraid because God is always with us! Our journey begins right now!"

The SYM 2017 Confronto Meeting ended with the Eucharist presided over by the Rector Major at the Don Bosco Basilica and was followed by the relocation of the relics of Don Bosco stolen and found again in June; the relic's return was celebrated in the presence of the civilian and military authorities who collaborated in its recovery.