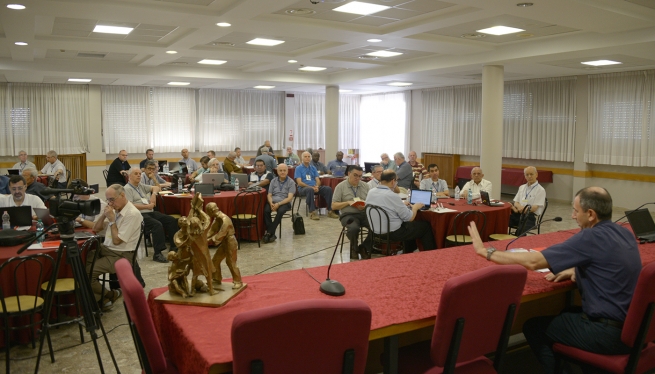 The event officially opened today, August 17th, and will continue until Saturday 26th. Dedicated to Italian-speaking secretaries, this first round will be followed by a second meeting scheduled for September 14 - 23 for Anglophone Secretaries.

The first of its kind for the Congregation, the idea for such an initiative was born during the intermediary Autumn session of the General Assembly in 2016. “This meeting,” Fr. Stefano Vanoli, Secretary General of the Council, explained at the start of the meeting, “aims to deepen the contribution given by the Provincial Secretary to the governing actions of the Province, especially regarding the consistency of the communities, religious discipline...”

Fifty Provincial Secretaries from five regions of the Congregation (Mediterranean, Central and North Europe, Africa-Madagascar, Interamerica, and America-South Cone) are participating. Speakers include: Fr. Francesco Cereda, Vicar of the Rector Major; the aforementioned Fr. Vanoli; Fr. Pier Fausto Frisoli, General Councilor; Fr. David Albornoz, Vicar of the Province of Chile; and Sr. Annunziata Remossi, of the Oblates of the Virgin Mary of Fatima, the Congregation for the Institutes of Consecrated Life and the Societies of Apostolic Life.

With two morning and two afternoon sessions per day, the meeting intends to offer a better understanding and application of the Congregation's administrative and canonical practice in light of the Code of Canon Law and the Salesian's own, starting with what is collected in the Volume “Judicial Elements.”

The agenda also foresees time for practical-operative work through workshops on specific topics, such as singular administrative acts or the new database for registry management.

There will, of course, be time for meditation, fraternity and community sharing and, finally, a cultural outing to visit the Benedictine monastery of Subiaco.